A lovely little daysail with my Daughter

Blake Island is a lovely little Marine State Park located 8 miles West of downtown Seattle.  The island has an interesting history.  It was an ancestral camping ground of the Suquamish Indian tribe.  Legend has it that Chief Seattle was born there. Capt George Vancouver noted the small round island in his journal in 1792 during his exploration of the area, but didn't bother naming it. It was later surveyed and named Blake Island in 1841, but local settlers referred to it as Smuggler's Island. Shortly thereafter the island was logged until its timber was exhausted, abandoned, and neglected until the banks foreclosed on the loggers.  Around the turn of the century it was sold to the wealthy Trimble family who renamed it Trimble island. They built a mansion and a beautiful estate where they lived until 1923, when Mrs Trimble died in a freak accident. The Trimble family abandoned the estate. Once again, smugglers, this time in the form of bootleggers and rumrunners, used the island during Prohibition.  It was rumored to be used as an ammo dump and a unit of the Coastal Artillery of the US Army was garrisoned in the Trimble mansion.  After they left, the mansion was gradually plundered, vandalized and finally burned down in the '40s by two High School students who camped there in a home-made 16' boat.  The neglected island was traded to an investment company. After the war, developers expressed an interest in building a luxury resort hotel on the island, but it was traded for timber instead to Washington State where it was turned into a State park. Tillicum Village, a popular tourist attraction featuring Indian arts, culture and food , was added in 1962.  Today, about 100,000 people visit this lovely little island every year.

Last Saturday my Daughter Heather and I were two of those visitors.  We launched Ellie and headed for Blake under beautiful blue skies and 5-10kt winds. We knew we couldn't linger long on Blake because the forecast was for bad weather to move in that evening. 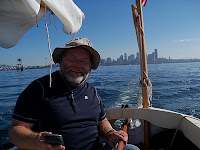 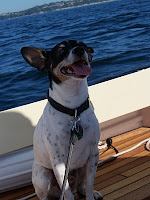 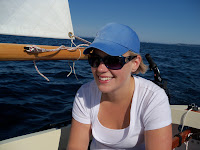 Heather's little dog "Spud" was very excited to come along. He enjoyed every minute of the hour long sail across the Sound. 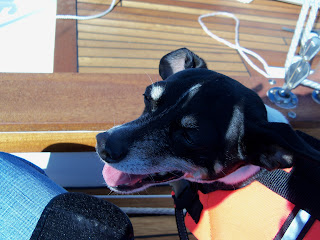 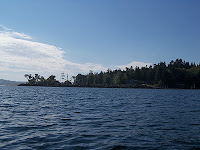 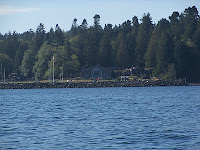 The Indian longhouse of Tillicum Village behind the breakwater. 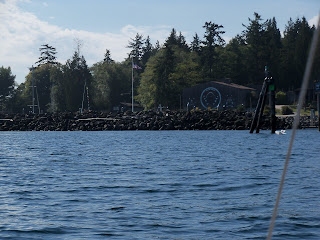 We tied up in the marina and went ashore. Blake Island was buzzing with activity. The entire shoreline was covered with dozens of tents belonging to Cub Scout Pack 144, there for a three day campout.  They were having a blast building driftwood forts and fishing off the docks for pile perch.

The tour boat Argosy dropped off tourists at Tillicum Village while we ate lunch and a steady stream of pleasure boaters filled the marina for the weekend.


After lunch we set out to explore the island. 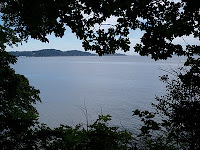 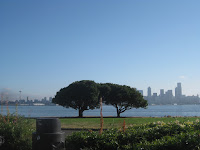 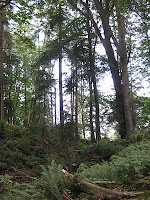 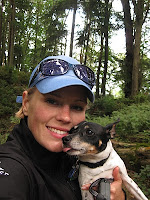 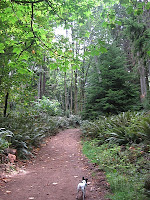 We were only able to stay for a few hours.  Storm clouds were starting to gather so we headed back towards Seattle.  With the wind picking up, this was a great opportunity for Heather to do some sailing.


The Space Needle served as a great navigational aid 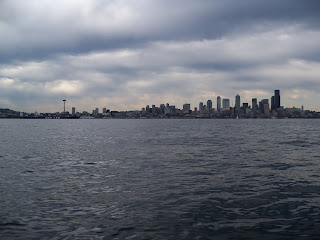 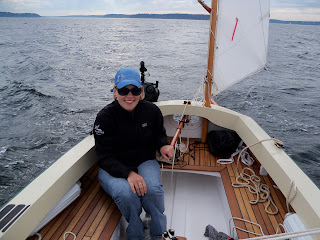 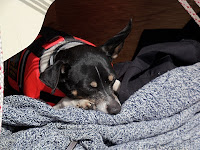 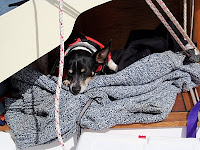 It was a wonderful little daysail to one of our favorite local spots. We hope to do it again soon.
Posted by Joel Bergen at 10:17 PM