Best festival yet.  It gets better every year.

I've been doing quite a bit of dinghy cruising this year. So much so that I haven't had much time to write about it, sorry.

I've gotten my packing routine down to the point where I feel it's getting quite efficient.  I always bring the same items and store them in the same place for every trip.  A little organization goes a long way when it comes time to find something.  I try to bring only what I need, and use items for multiple purposes whenever possible.  I only bring extras of items that are crucial.

It really bugs me to have things out where I have to walk on or around them, so I store everything in the lockers and under the thwarts and side decks. Once everything is packed away, it looks like I'm not bringing anything at all.  That's not easy to do in an open boat.

Here is the packing list that I use.  This first page shows where on the boat I store everything.   Many of the items are stored in bags.  I use soft-sided cooler bags for food and water, duffel bags and backpacks for clothing, and dry bags for electronics. Page 2 shows the contents of each bag.

Most of this stuff stays on the boat permanently.  Usually all I have to pack for a trip is food and clothes. 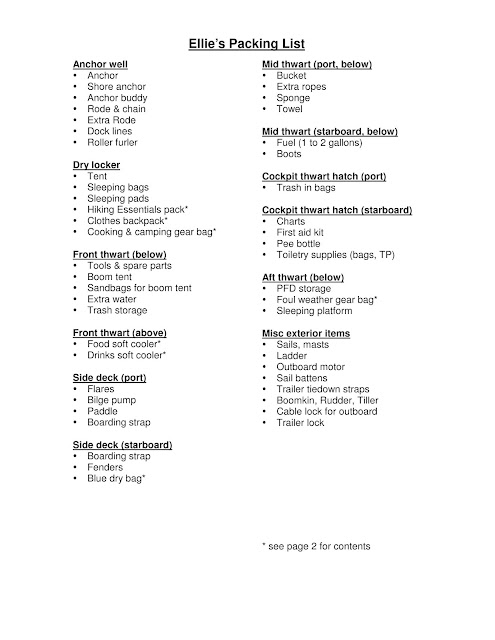 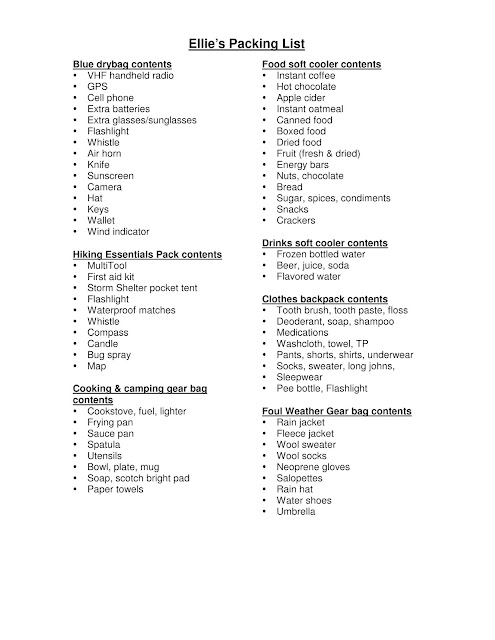 Andrew did a magnificent job building Wren. Her beautifully varnished seat tops and laminated tiller are especially beautiful.  I love her colors, and envy the batten arrangement in her mainsail, which allows the main to be dropped without removing the battens, unlike mine.  Comparing boats was a learning experience for us both, as we pondered  each other's ideas.  There are more photos of Wren here.

The Palooza and followup cruise were both fantastic.  We had every kind of weather, which made the trip quite interesting.  It was great meeting John Welsford again, albeit briefly, as John was quite busy tending to his Scamp Camp.

For more photos of the Pocket Yacht Palooza and Cruise, click this link.

Can't wait to do this again next year!
Posted by Joel Bergen at 12:10 AM No comments:

How to make a boat tent for under $20

It's that time of year again.  Spring Tweak time!  I know, I know, it's more of a midsummer tweak.  Sorry, I'm way behind schedule this year.

This year's Spring Tweak is an inexpensive boom tent. 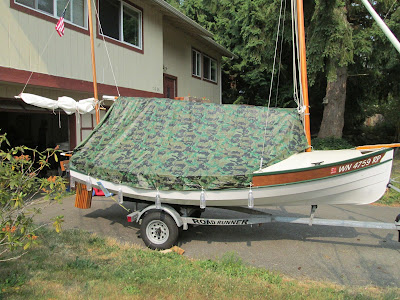 Most of the messabouts that I plan on attending this year require sleeping onboard the boat.  Unlike Sucia Island's abundant camping, many of the other destinations we like to visit have limited camping.  Saddlebag island, for instance, only has 5 campsites.  Hope Island, only 4.  Next week is the "Pocket Yacht Palooza", followed by a 4 day "Crooza" to several destinations which may or may not require sleeping onboard. It's also nice to have the option to tie up at a marina.  And there's always the possibility I could be late getting home and have to anchor who knows where for the night.  Having a boom tent onboard at all times really is a necessity. It doesn't have to be fancy in my opinion.  A quick and cheap one made from a tarp will do just fine.

So here's my version of the classic tarp-type boom tent. 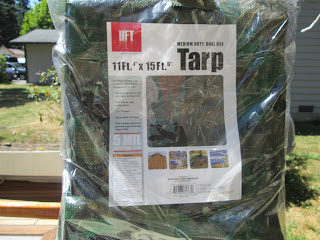 They also carry the classic blue and silver tarps too, of course, but let's be honest.  There's really only one choice here.  Not only does cammo look good, in a far-less-tacky sort of way, but it also enables one to go Stealth Camping.  Stealth Camping, in case you are unfamiliar with the term, is the practice of arriving late at night, mooring up to someone's private dock, boat, or any other no-camping area, and stealing away early in the morning before anyone realizes you were there.  I, of course, would never do such a thing ;-) 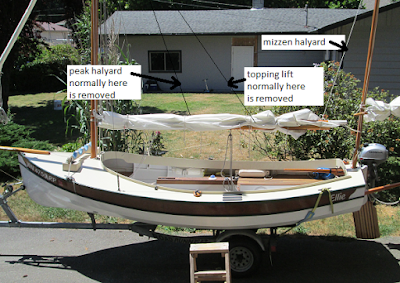 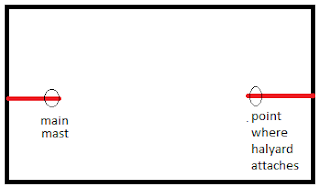 That allowed me to drape the tarp over the ridgepole.

The next part is simple, as the famous sculptor Michelangelo allegedly once explained:

After marveling at Michelangelo’s statue of Goliath-vanquishing David, the Pope asked the sculptor, “How do you know what to cut away?”
Michelangelo replied “It’s simple. I just remove everything that doesn’t look like David.”

So I got out my scissors and trimmed away everything that didn't look like a boom tent.
I left some flaps at the front and rear of the boom tent so I could seal both ends off in a rainstorm. 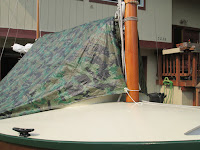 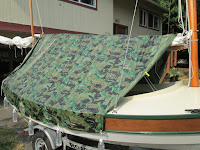 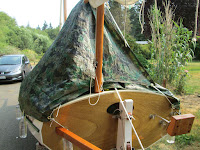 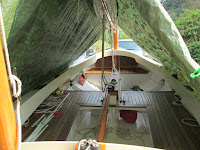 The flaps can be rolled up and secured with a clip to keep them open, or tied down with a bit of rope to keep them closed.  I trimmed the sides even with my lower rubrail.

When I removed the tarp and laid it out flat, it looked like this.  Not an easy shape to define on a  drawing.  You can see why it really needs to be cut in-place. 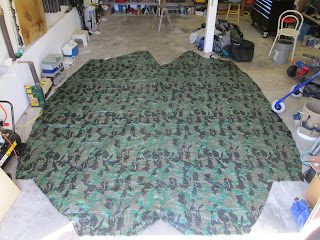 The most difficult part about making a boom tent is coming up with a way to secure the sides.  Several methods have been employed.  Ropes can be strung under the boat from one side to the other.  Clips or snaps can be added to the gunnels to attach the boom tent to.  Ropes can be run fore-and-aft to provide an attachment point, and so on.  But the easiest, most effective, and elegant solution I have seen my friends use are sandbags.  Several small sandbags weighing about 1 lb each are fastened to the boom tent to weigh the sides down and keep them taught. They work very well and don't require a bunch of new holes to be drilled in the boat.

I didn't have enough time to make sandbags before our annual Sucia trip, so I improvised.  I used 500ml plastic water bottles instead of sandbags.  They actually worked quite well. 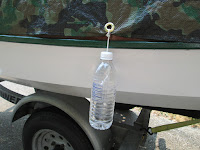 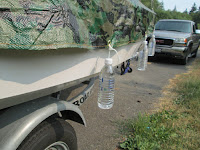 I drilled a small hole in the water bottle caps, tied them to the boom tent, and store the empty bottles under my front thwart.  When I need them, I simply reach over the side and fill them with seawater and screw them onto the bottle caps. The only thing I don't like about them is they tend to bounce against the hull at night, keeping me awake.  I think sandbags would be quieter so I plan on replacing them with sandbags soon. 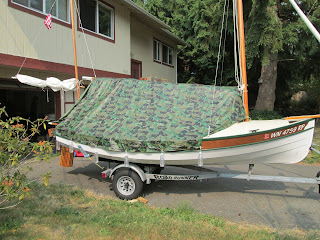 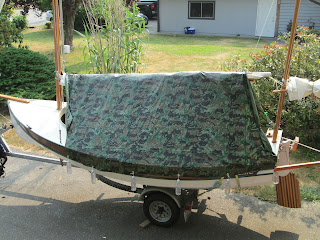 My son Tim and I just got back from our annual Sucia Small Boat Rendezvous.  It rained off and on the entire weekend, but we were cozy and warm under this humble boom tent, using our sleeping platform.

When we awoke in the morning, there were no signs of condensation or leaks anywhere inside the boom tent.  We were very pleased with the results.  Well worth the $20 to be sure.
Posted by Joel Bergen at 9:44 PM 4 comments:

Pull and be Damned Messabout 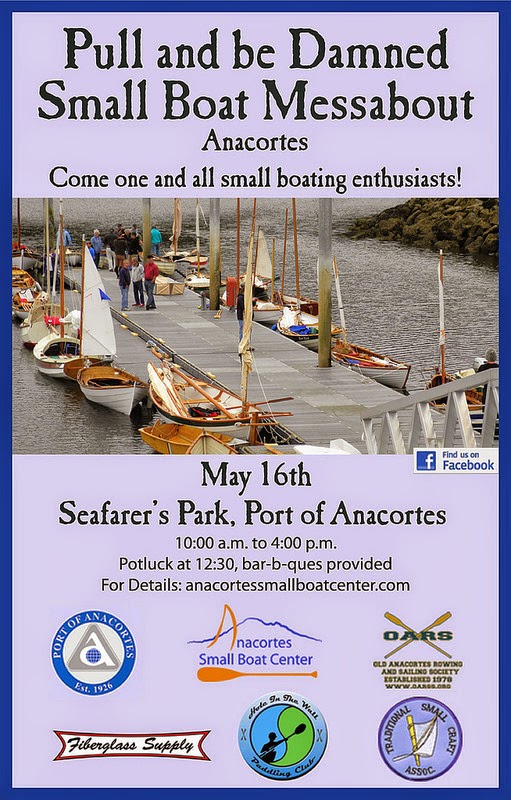 Come to the second annual Pull and be Damned messabout in Anacortes on May 16th.  We enjoyed this messabout a lot last year and am looking forward to attending again this year.  There will be a potluck, boat sharing, and an optional overnight campout at nearby Saddlebag Island.  For more details see the forum at Woodenboat.

Posted by Joel Bergen at 6:25 AM No comments: My good friend Steve has posted an article on Duckworks Magazine, telling the story of the Eastern Washington Moveable Messabout.  I really enjoyed that trip!  Plans are in the work for not one, but two similar trips this summer.

Enjoy Steve's telling of the story by clicking here.

And Dan's wrapup here.
Posted by Joel Bergen at 12:37 PM No comments: