It seems like it's been a while since the last update. Here is how Ellie looks as of today: 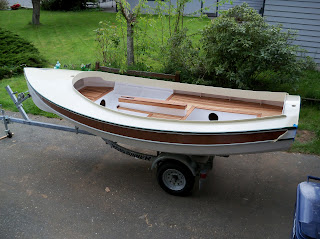 Several changes have taken place since my last post.

My oldest daughter Heather turned 26 and my Son Tim turned 21.   Normally I'd say Happy birthday kids!  Except you're not kids any more! I decided I didn't like the deck color I chose.. While "Natural Wheat" looked ok in the garage under the florescent lights, out in the daylight it took on an alarming shade of pink. So I repainted the decks a more classic almond color. 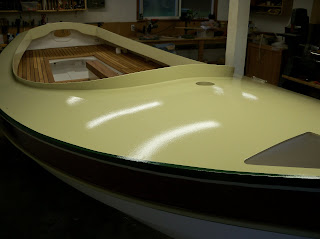 All parts have been completed.  We are now on the home stretch with only varnishing and rigging left to do.  The last parts were these little pads for the jib and mizzen cam cleats & fairleads. 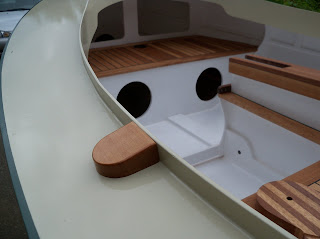 The centerboard case top has been completed.  At the forward end is a quadruple fairlead made from a piece of ipe with four holes for the peak and throat halyards, centerboard lift and roller furling lines which will all be lead aft. 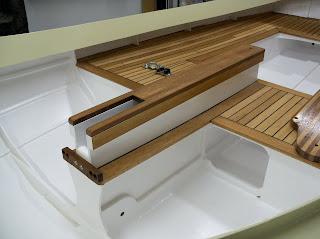 Varnishing has begun. I saved all my varnishing work for last so I could do it all at once.  I have two coats applied so far. 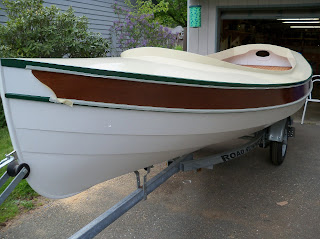 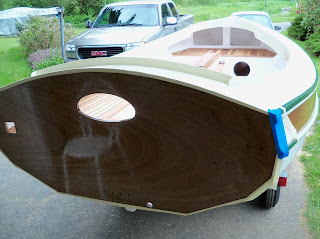 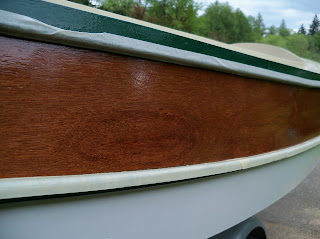 The spars have been completed and also getting varnished. I hung them from the ceiling so I could conveniently varnish them while also keeping them out of the way.
In the back, left to right is the gaff, boom, mizzen and main mast. In the foreground are the boomkin, tiller, bowsprit and mizzen boom. 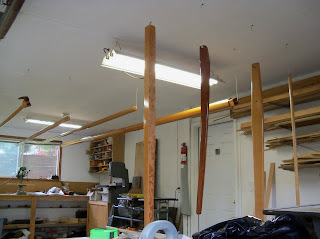 I sold my British Seagull outboard and ordered a new Suzuki 2.5hp four stroke.  While I have a fondness for antique outboards, the Seagull had a few drawbacks that I decided I had to do without. I needed a motor with 360 degree steering or reverse, I needed a standard 15" short shaft motor (the seagull was 13"), and I wanted a bit more power (the Seagull is 1.5hp).

Next up, rigging. All of the rigging has been ordered from Duckworks and is ready to install.
Summer is coming and time is running short so I will postpone my "Lovely wooden blocks" for a later date and use the blocks I purchased from Duckworks for now.

My next blog will be all about rigging.  Until then, cheers!
Posted by Joel Bergen at 10:32 PM 4 comments:

I've got three coats of paint on the decks and coaming so far.  The color is called "natural wheat" which is just a fancy name for "tan". The rubrails will be painted hunter green which hopefully will provide a pleasing accent. 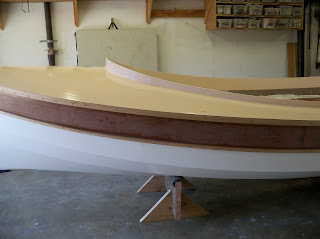 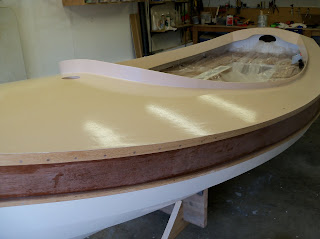 Originally I wanted to varnish the coamings, but I had to paint them due to having to use 3mm ply in order to make the tight bend at the front.  In retrospect, now I'm glad I painted them. I think if I had gone with varnished mahogany coamings with oiled mahogany seats, they would not have looked well together, or would have resulted in Mahogany Overdose. 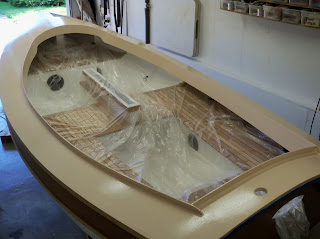 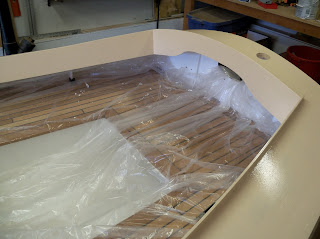 With only 3 coats so far, I've still got a fair bit of grain showing through the paint. Many light coats thoroughly sanded between each coat takes care of that. 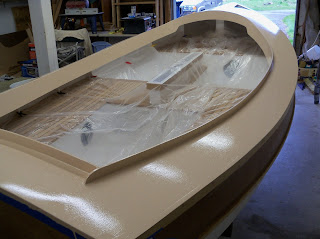 I also got the "Quarter Badges" glued on with one coat of paint so far. These are purely decorative on Navigator.  On fishing vessels these were used to protect the ends of the planking from chafing of fishing nets and other lines. 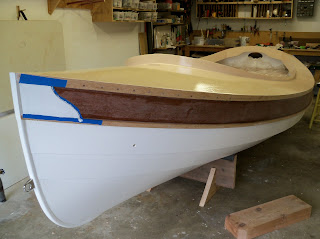 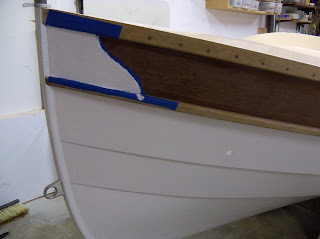 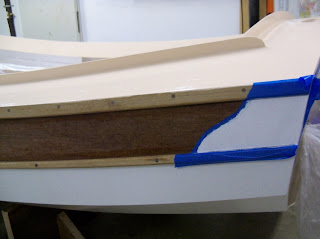 The rest of this week will be devoted to the "painting grind" and putting some thought into rigging. Hopefully by this weekend I will be able to make some more sawdust, in the form of the bowsprit and boomkin.
Cheers
Posted by Joel Bergen at 8:04 PM No comments: