Pull and be Damned

The Pull and be Damned messabout in Anacortes was fantastic.

I am a member of several small boating clubs.  The Coots, the TSCA, the Pocket Yachters.  They all have a slightly different focus, ranging from inexpensive and experimental boats to honoring authentic traditional craft.  From production trailerable cruisers to homebuilts. From power to sail.

But this weekend was my first opportunity to spend a weekend with the Old Anacortes Rowing and Sailing Society OARSS.  The beauty of their boats and their seamanship skills left me awestruck. From deftly launching their craft by crane, to sailing in reverse to make a perfect mooring at a dock, camp cruising, clothesline anchoring, traveling anywhere and everywhere by sail and oar only.  They even rescued a stranded aircraft once.  With just a glance at the sea, they knew how the tides and currents would swirl around the myriad islands that day.  I had nothing I could offer as I spent the weekend in humble admiration of their seamanship skills.

It was also a weekend of many other firsts for my son Tim and I.  The first first (ugh) was Ellie's launching by crane, deftly done by James McMullen (in the red vest) while I nervously tried to assist and learn anyway I could.

(btw, these are all hi-def videos. Click the [ ] in the lower right corner to make them fullscreen)
Relieved at not making a big splash, I headed over and tied up to Small Boat Dock, where the messabout was to be held.  There was my second first (ugh).  I had to rig Ellie on the water.  It took about twice as long as usual, but was a success.  Fortunately there was flat water and no wind.

One by one the remaining boats arrived.  The messabout officially began at 10:00.  Several boats were available for anyone to borrow.  My third first was testing one of the Gentry skin on frame whitehalls. Here are some videos of the event:

The James led a group aboard Island Star, a 4-oared racing gig.  A replica of the worlds fastest boat in 1824.

After the messabout, most of the group headed over to nearby Saddlebag Island for an overnighter.  I've never been to Saddlebag.  Another first!

And yet another first. While there, I got to try out my new Kelly Kettle.  The Kelly Kettle is a cookstove that uses sticks, twigs, and dried leaves for fuel.  It will boil water and heat food at the same time, very quickly.  It also fries and has a BBQ grill.  I used it twice and love it already.

The next morning, the sail and oarsmen set out early for a circumnavigation of Guemes Island.  Simeon Baldwin, with his SCAMP Noddy and I decided to spend the day sailing together instead.

And the end portion of this video is really pretty.
This also gave me an opportunity to fully test my tiller locking device.  It works perfectly.
We spent many thoroughly enjoyable hours sailing side by side in the warm sunshine and gentle breeze.  After a while we took a break and hiked over to my favorite bar and grill, The Rockfish, for lunch. The sail and oar group returned from their circumnavigation so it was time to head back to the crane.  Once again, The James came to my rescue, expertly extracting Ellie safely from the water.  Here is a video of Noddy taking flight.

There are some really nice photos of the event over on the Woodenboat Forum.
A fantastic weekend.  Simply fantastic. 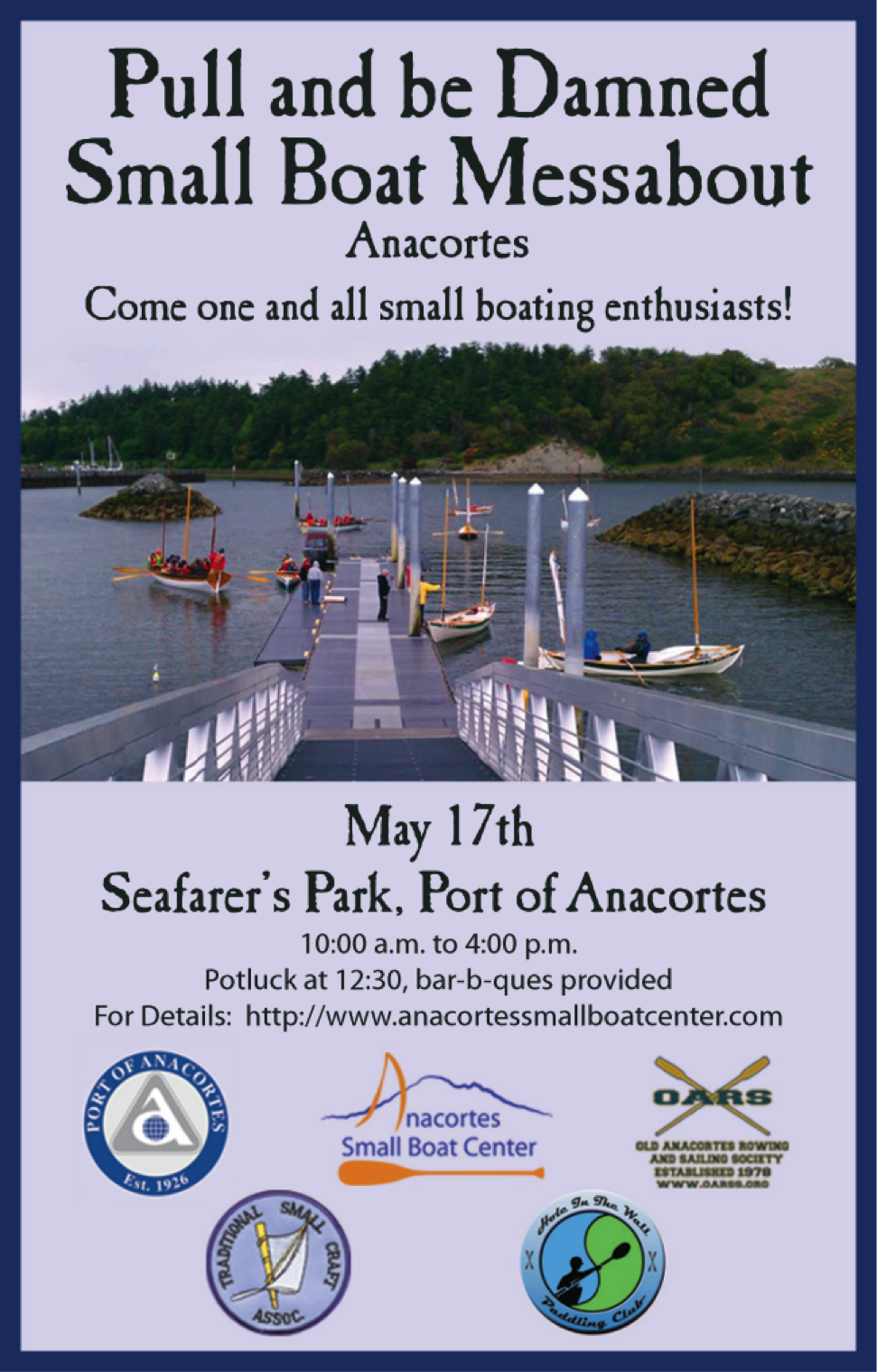 This weekend's messabout is one that I've been looking forward to for quite some time.  I'm really excited.  It's called Pull and be Damned and it will be held at Seafarer's Memorial Park in Anacortes, WA.


Looking over the posts on the Woodenboat forum, it looks like there will be an impressive selection of drop-dead gorgeous sail and oar boats to drool over.  There will be a potluck bar-b-que, and an optional overnight campout on nearby Saddlebag island.

The event is organized by legendary sail and oarsman James McMullen.  I'm looking forward to hearing firsthand about his recent epic capsize off Port Townsend.

Hopefully the weather will hold out because I plan on taking lots of photos and videos!
Posted by Joel Bergen at 11:38 AM 5 comments: