Messing About with Oysters 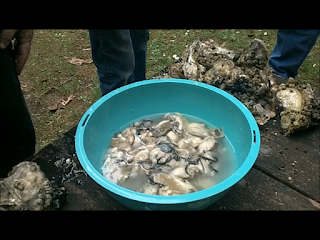 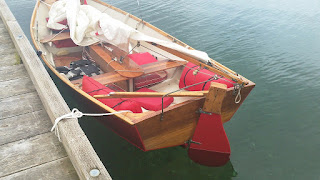 Marty Loken and Marjiann (Mojo) Moss who operate Island Boatshop, debuted their 1955 Bill Garden-designed Port Madison Pram, recently refinished and ready for its first sail in a few decades. Port Madison Prams, Marty explained, were designed by William Garden for members of the sail-only Port Madison Yacht Club, whose members wanted a sail-training boat for youngsters and a boat adults could race on weekends. The prams are 13'-6" and resemble an El Toro on steroids, with tons of volume-per-foot.

Tom and Susanne Regan who operate Grapeview Point boat works brought their shellback dinghy.  This dinghy is fast!  We spent a good part of the day trying to catch up with them. 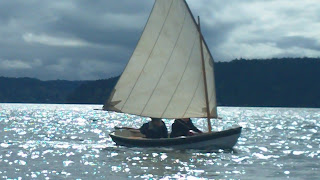 Doryman Mike Bogoger brought his Ken Basset Firefly Finesse. Finesse is a beautiful boat, but unfortunately Mike had some technical difficulty with his oarlocks (he, uh, sorta forgot 'em). Mike had some limited success with a borrowed set of oars and oarlocks but unfortunately we were not able to witness Finesse's full potential. I pounced on the opportunity and invited Doryman to come sail Ellie with me, and he accepted much to my delight.

Randy Jones brought his Core Sound 17, which he later loaded up with a crowd of TSCA members. 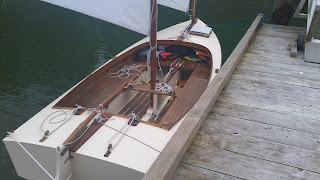 Bob Hancock brought the fiberglass sloop that he's been working on over the winter. 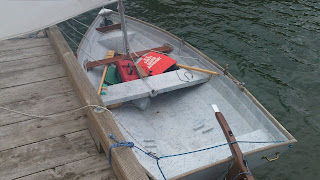 Boats were rigged and launched by 11:00 and we all enjoyed a lively sail.

Then it was time to get down to business. Time for some serious oyster shucking.  These oysters were huge and they put up one helluva fight..

We eventually won and let me tell you, these were the most delicious raw and pan fried oysters ever! 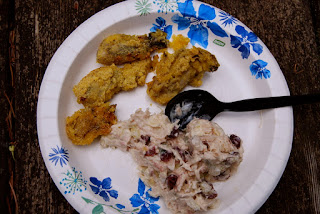 After the oyster feed, it was time for another terrific sail.  Conditions had improved even more, if that's even possible, from the morning's sail with a bit more wind and sunshine. With Doryman at the helm, we set out to find Marty in his Port Madison pram to get some action shots.  We couldn't find them, so we tried instead to catch Tom and Suzanne in their speedy shellback.

I sure hope we can do this messabout again next year!
Posted by Joel Bergen at 5:32 AM 4 comments:

Stayed home from work today because I wasn't feeling well. Took advantage of the day off to try and teach myself some basic video editing skills.  I'm still terrible at it, but it feels like I made a little progress. Have a look and tell me what you think. At least the music is good.  I'm a big BMG fan.  I love the sweet sound of PVC.

Build your own Scamp with John Welsford himself! 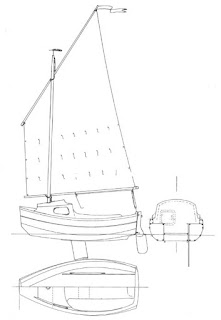 Big news in the SCAMP world. The Northwest School of Wooden Boatbuilding is launching a very special "Build a SCAMP" course this summer (August 6th) here in Port Townsend, WA.

What will make the two-week-long course especially notable is that the instructor is SCAMP designer, John Welsford, who is flying in from New Zealand especially to teach 12 students to build 12 SCAMPs.

If that wasn't enough, the NWSWBB has partnered with the Northwest Maritime Center on the course, so all 12 SCAMPs will be built at the NW Maritime facility down on the water in Port Townsend—the birthplace of SCAMP #1.

Students will spend two weeks with John Welsford and two shop assistants building their own SCAMP from the Small Craft Advisor kit made by Turnpoint Design. Students can trailer home their mostly completed SCAMP at the end of two weeks, or opt to extend their stay for as long as two additional weeks.

Details are just being finalized. For more information check the SCA magazine message board or contact the NWSWBB at: (360) 385-4948 or http://www.nwboatschool.org
Posted by Joel Bergen at 3:32 PM 3 comments:

Saturday was our second sail of the year, and it was, shall we say, very interesting.

The forecast was 5-10 mph winds with temperatures in the low 50's (12c).  Since the winds were forecast to be light, I decided to take Nina, our cocker spaniel, along.  Nina loves to sail, although it's been  a few years since her last one. Turns out she's lost her sea legs, but more on that later.

We arrived at the Port of Everett ramp around noon.  The winds were light, just as forecasted, and the sun was warm in the gentle breeze. I parked a short distance away from a family that was rigging a Macgregor 26.  Maybe it's just me, but I still have trouble embracing the concept of having a 60 HP outboard on a sailboat, towing a water skier. To each his own.  The owner gave me a thumbs up and a "Nice boat" on his way to the ramp, and I returned the compliment.

We launched Ellie about 45 minutes later, but struck up a long conversation with a very friendly fellow boatbuilder at the dock. He was genuinely impressed with Ellie and had quite a few questions.  There could be another Navigator plying the waters of Puget Sound someday soon.

By the time we finally departed I noticed that the wind had picked up.  A lot, in fact.  Flags were blowing horizontal so it had to be up to 10-15. 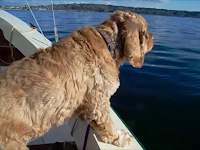 We raised all sail and headed south, inside the jetty, towards the sound with Nina on her leash in one hand and the tiller in the other.  Nina was excited to be at sea again.  She's very curious so she had to explore every square inch of the boat.  A couple times she would put her paws on the side decks and I told her to get down.  The third time she did, the boat hit a wave, Nina lost her balance, and overboard she went!

Steve, over at Arwen's Meanderings, has recently written several very interesting blogs about safety gear.  One of the many items he has written about are life lines. Fortunately for Nina, she essentially had a life line and I was able to use it to reel her back on board. It all happened so fast.  I don't think she was in the water more than 10 seconds, but it was frightening to see her being towed through the water at 6 knots until I could grab her.  It would have been more frightening had she not had a lifeline. Would I have been able to drop sail, fire up the outboard, and been able to find her?  How do lifelines work?  If I had one, would I clip myself up near the bow, so I'd function like a sea anchor, or near the stern where I'd probably get towed along like a giant crankbait?

Nina was fine.  She was cold and wet, but didn't appear to have inhaled any water. She shivered for a little while but dried out pretty quickly.

By the time we finally got out to Possession sound the wind had really picked up. Whitecaps everywhere and the water was like the inside of a washing machine.  This was not in the forecast!  I stopped and put in a double reef in the main.  We sailed around for a little while.  Ellie handled the conditions just fine, but it was too rough to get any videos, I was getting uncomfortable and I was worried about Nina falling in again so we headed back to safety inside jetty island.  Conditions there were great.  Calm water and loads of wind, so we had a blast sailing back and forth for a couple of hours.

A sailboat race had just finished and the boats were all returning to the Everett marina.  Several of them sailed up to us to give us compliments.  "Nice boat!" and "What kind of boat is that?".  One of the crew members was a fellow I work with, and another fellow invited me to join the dinghy races that they have on Fridays that I didn't know about.

The wind seemed to be calming down so we headed back toward Possession sound again, but kept the double reef in to be safe.  Conditions had improved enough so that I could get out the cameras.  I attached one to the mizzen mast and filmed a bit with the other.  Nina was completely warm and dry by now so we headed out towards Gedney island.


The wind dropped a bit more, and the sky cleared up so we shook out the reefs and sailed on.

By the time we got about halfway to Gedney, the wind completely died!  The GPS said we were moving 0.0 knots, occasionally 1.5 knots, with all sails up.

We waited for a while, but still no wind so we dropped all sail, fired up the outboard, and headed back.

It was a very interesting day, indeed.
Posted by Joel Bergen at 12:00 AM 6 comments: