When I first set up this blog I honestly didn't think anyone would read it.  I don't consider myself a writer by any stretch of the imagination. In the engineering profession we are taught to be brief and to the point. To present the facts and figures.  Anything more is an unnecessary waste of people's time. There is a reason that there are very few novels written by engineers. Nor do I consider myself a very good sailor, or even much of a boat builder.  Ellie is only the second boat I've ever built.  What could I possibly have to offer a community, most of whom seem to have more knowledge and experience than I?

But maybe the reason this blog has had so many page views is for that very reason. Sure, everyone values expert advice, but it's also nice to read stories about the adventures, and misadventures of your peers.

Who knows?  All I know for sure is I am humbled and honored that so many are interested in anything I have to say.

I'd like to thank you all for tuning in.  I hope I can continue to hold your interest in the future.

Oh, and to celebrate this milestone, I've brightened up the place a bit.  Hope you like it.
Posted by Joel Bergen at 4:57 PM 4 comments:

Gosh it's been nearly a year since my last Blue Man Group sailing video. Sorry folks!  Here you go.  This is my favorite BMG tune, called Rods and Cones.  Crank it up!  In case you haven't guessed by now, I'm a big BMG fan.  Can't wait to see their new show.


This one is dedicated to my good friend Steve at Arwen's Meanderings. Here's wishing you some DECENT WEATHER this year my friend.  I hope you get plenty of sailing in this summer.  You earned it.
Posted by Joel Bergen at 5:42 PM 2 comments:

I finally got around to tweaking a few things on Ellie that have been bothering me for a while.

Tweak #1:  Jib Fairleads
When I built Ellie, somehow I missed the note on plan sheet NV11 that tells you where to locate the jib fairleads.  They should be located 120mm aft of B4 and close to the coamings.  The fairleads have been relocated per the plans. Verdict: The jib shape appears noticeably improved.

Tweak #2: Roller Furler deck block.
My roller furler line makes a 90 degree turn through a fairlead in the deck.  The arrangement works, but created unwanted friction and abrasion on the line.  I scoured the internet searching for a block that would work here but could not find one.  I finally gave up and fashioned my own.


I made the deck block from a small swivel that I got from Duckworks.  I cut one leg off of one side, and added a roller to the other and mounted it right over the fairlead.  Verdict: works great. Much less friction and no more abrasion.

Tweak #3: Halyard Cleats
For my mainsail halyard cleats I was using cam cleats which, like all cleats, have their pros and cons. I liked how I could easily give the halyards a tug to tighten them but I didn't like the angle that I had to pull the halyards at, how they took two hands to secure the halyards, and how a stop knot was required in case the halyard became inadvertently released.  For my application the ideal halyard cleat should have these features


I couldn't find cleats that I liked so I ended up making my own jam cleats from white oak and painted them black to match my other cleats.  They're similar to these.  Verdict: I like them a lot. They met all my expectations.

Tweak #4: Whipping
I finally got around to whipping the ends of all my lines.  Verdict: very salty. 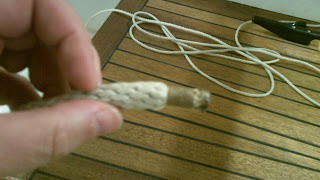 Tweak #5: Boom height
This was the biggest tweak.  The boom on my gaff-rigged Navigator is right about at chin level.  I've always wished it cleared my head like it does on the lug-rigged sailplan. So I decided to raise the boom enough to clear my head (10 inches) and give it a try.  This involved moving the gooseneck 10 inches higher on the mast and lowering the gunter on the gaff by 10 inches.


Verdict: The jury is still out on this one. The boom clears my head nicely, but raising the sail 10 inches made a noticeable difference in the way the boat sails. The boat heels over more now and reacts more to gusts. One of the things I like most about Navigator is how stable and upright she sails. It was uncomfortable to feel her reacting this way.  I think I'll sail her a few more times with the boom in this position but right now I'm leaning towards putting the boom back where it was or at least not raising it quite as high. [UPDATE: Eventually settled on 6" above the plan location.  Seems to be the best compromise between safety, appearance and performance]

Here is some video of the year's first sail, with the raised boom.


Maybe I should switch to a gooseneck mounted on a sailtrack.  What do you think?
Posted by Joel Bergen at 9:42 PM 7 comments: