Sunday's daysail was much more relaxing. The winds started out very light, so I figured this would be a good time to try the classic Gaff Cam trick. The trickiest part is guessing what angle to aim the camera at. After a couple attempts, the afternoon sea breeze started to kick in so I mounted the camera on other parts of the boat.  The breeze built to the point where I eventually went to one reef in the main, then it died off a bit. No Jib and Mizzen this time!  I ended up taking a trip around the north end of Jetty Island to check out the ospreys that nest atop the pilings there.

Here's a video of the day's sail, set to more of my favorite Blue Man Group music.  Hope you enjoy.

I seem to be doing more than my fair share of jib and mizzen sailing lately.

After three days of having no wind at Sucia, we awoke to a very nice 15kt southeasterly wind for the return trip on monday.  Perfect!  A welcome sight after having motored over 40 miles during the previous three days.

Bob and I set sail for Sandy Point marina together, Bob in his Jim Michalak designed Scram Pram "Duck" and I in Ellie, having dropped off my son Tim at school in Bellingham the day before. 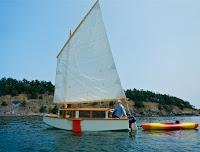 The wind and seas gradually increased during the voyage.  About halfway there I started to get hit with some spray.  Reefing early is always a good idea and it's something that I always do.  Besides, I was in no hurry to get home!  So we hove-to and went straight to jib and mizzen.  It was a good decision as the seas continued to build and I still got sprayed on despite being heavily reefed.  Here, enjoy this one in slow-motion. I was very impressed with Bob's Scram Pram. It's fast!  Really fast.  And dry too.  Bob can pilot the boat from inside it's warm, dry cabin without sacrificing his view of his beautiful surroundings. My next sail was last weekend.  The forecast was for 10 mph winds.  Excellent!  I could do with a nice relaxing sail. Ellie and I set out for our typical daysail - a lap around Hat (Gedney) island.  It started out with a pleasant breeze, just as forecast, but then a squall quickly rolled in, churning up the bay.  There have been frequent thunderstorms here lately, so I decided that it would be an excellent time to high-tail it home. The more times I do it, the more I appreciate using Ellie's mizzen to heave-to.  When the conditions get rough, I simply sheet the mizzen in tight, lash the tiller, furl the jib and drop the main.  Ellie points into the wind and stays there, giving me ample time to reef, collect my thoughts, take a break, or whatever.  If you look closely at the following video, you'll notice she doesn't point directly upwind, as you might expect.  She settles in at about a 45 degree angle to the wind and travels in reverse.  Note how the waves are hitting the starboard bow.
Heaving-to like this only takes seconds when you have all the controls led back to the cockpit.  Even lashing down the tiller is quick.  I use a bit of line with three loops in it.  One in the center and one on each end.  I slip the center loop over the tiller and the end loops over the stern cleats and that's all there is to it.

Still, I am looking forward to a relaxing sail next time out!
Posted by Joel Bergen at 7:10 PM 3 comments: 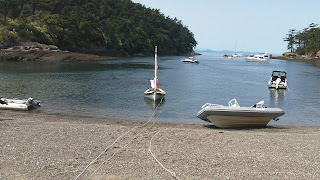 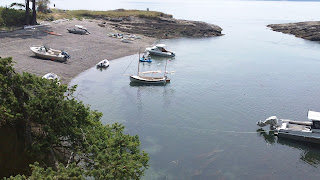 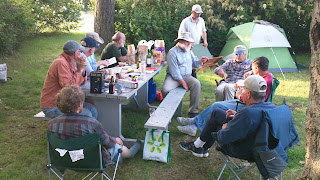 After what seemed like an interminably wet Spring, the weather finally broke just in time for this year's Sucia Small Boat Rendezvous.  My Son and I met up with Marty Loken at Sandy Point marina early Friday morning, arriving almost simultaneously.  After rigging, launching, and puttering a rather long way through Sandy Point, we finally reached the Strait of Georgia, or the "Salish Sea" which some people now call it, but most of us don't, only to discover ... No Wind.  Drats!


Marty rowed his beautiful Whilly Boat for a while.  We motored for a bit. 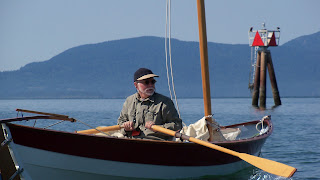 Then we towed Marty for another bit until finally, we started to feel a breeze. 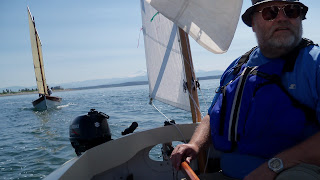 The breeze steadily increased until whitecaps began forming, so we stopped to put in a reef.

Shortly after we tied in the reef, naturally the breeze started to die off again, so we shook out the reefs. Argh!

Then, up ahead, we saw three Pelicans! I don't think I've ever seen pelicans around here before, so this was a real treat for us. I even managed to capture them on video as they flew away.

The wind was now almost completely calm, so we started up the outboard again. Then we saw dolphins!  I believe these are Harbor Porpoises.  We spotted them frequently over the course of the weekend. When we arrived at Fossil Bay we faced this little problem. I had to wait for the tide to come in so I could move Ellie close enough to the beach to set up my clothesline anchor. Note the seaweed.  This is the nasty stuff that nearly killed my outboard motor last year.  The motor sucked some of it into the cooling intake, plugging it, which caused the motor to overheat.  The engine block got so hot it melted the insulation on the wire to the kill switch, grounding it and shutting off the motor. If that hadn't happened, the motor would have surely seized up. While waiting for the tide to come in, some of the other boats began to arrive.  This gorgeous boat is a Connecticut River Shad boat.  After talking to the owners for a while, I finally realized that they weren't a part of our Rendezvous.  They lived on Orcas Island and were just there for the day.  I told them about our yearly Rendezvous and they said maybe they would join us next year. 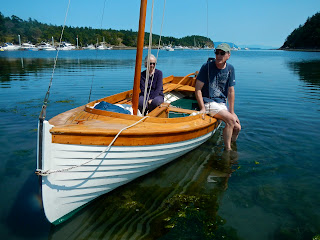 Others continued to arrive. Directly behind Ellie you can see Doryman Mike standing in his Valgerda and fellow Shopsmith owner and master woodworker Paul Miller in his Friendship. 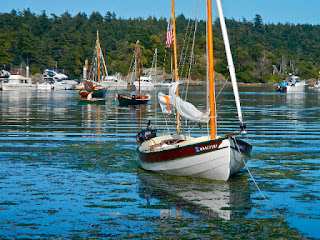 Is this tide ever gonna finish coming in??? It did (finally). 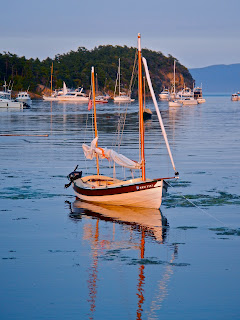 We set up camp, did a little hiking, planned our next day's trip to Patos Island, and enjoyed this beautiful sunset. 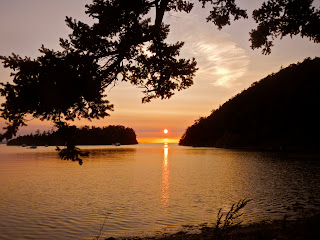 We retired, looking forward to tomorrow's Fossil expedition and trip to Patos.
Posted by Joel Bergen at 8:35 PM 1 comment: