This weekend I got the decks glued and screwed in place. Earlier I had cut them oversized and temporarily installed them so that all the screw holes could be pre-drilled, then removed them so I could work on the seat tops.  Despite all that prep work I still managed to install the decks slightly out of alignment.  If you look closely at the deck right at the stem you can see that the seam is mislocated slightly to starboard. Oh well, that's the way it goes sometimes.  Fortunately the deck still overhung all around and the seam will disappear when finished so the misalignment won't  matter. 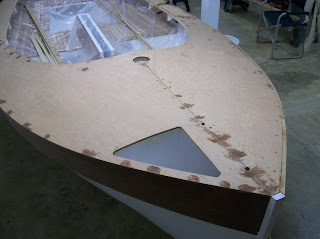 I enjoyed making the aft deck. After a bit of head scratching I decided to laminate and install a beam, seen here in this earlier photo. This beam was made by laminating three layers of 1/4" mahogany, clamped directly on top of the transom. After it cured it was trimmed and glued in place between the cockpit stringers. The beam's natural springback seems to have made the curvature turn out just right. 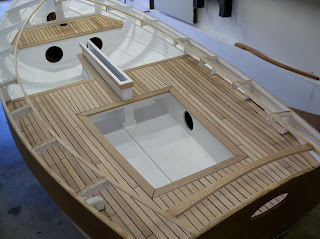 After making a template from doorskin, I used it to trace and cut out the aft deck plywood piece and then installed it.  There was quite a bit of force involved in bending the plywood to this much curvature, so a temporary post was used to prevent the beam from deforming. 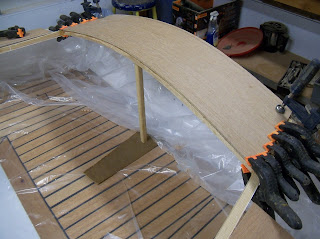 Doublers were then installed at the forward end of the cockpit for attachment of the coaming in this area. 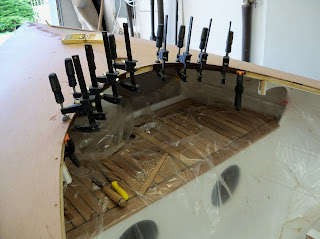 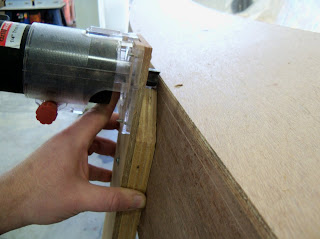 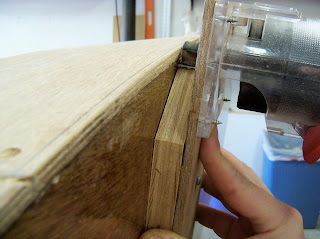 And finally, I began working on the rubrails.  A coworker donated some rough cut vertical grain Amish white oak to the project.  Lovely stuff to work with, although it's got a greenish cast that I don't really care for.  No problem as I was planning on painting them anyway. 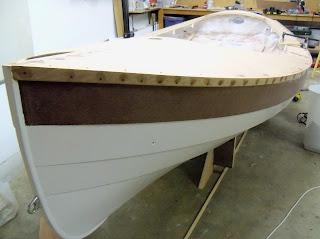 Now it's time to finish up the rubrails and then tackle the coamings.
Posted by Joel Bergen at 9:48 PM