Yesterday we had a great time at the first ever Pocket Yacht Palooza.  The Palooza was a one-day show celebrating smaller rowing and sailing boats, co-sponsored by the Port Townsend Pocket Yachters, the Small Craft Skills Academy and Northwest Maritime Center. I'd like to extend a special thanks to Marty Loken for organizing this event.

With over 50 boats signed up, there was quite a variety to see.  Here are some examples. My apologies for the brief descriptions and for all the ones I neglected to include.
This is  Roger's restoration project, the 16' Nooka Rose featuring a 55 sq ft sprit rig. A work in progress aquired 3 years ago, Roger's objective is to simply catch up on 15 years or so of deferred maintenance, then replace the rub rails and breasthook. The boat features an experimental and interesting Cullar inspired rudder fashioned from a salvaged door, but Roger hung on to the original higher aspect rudder just in case.

This is Bob's boat "Duck", a Jim Michalak designed Scram Pram, featuring 300 pounds of water ballast in 3 tanks which makes it very stiff in a breeze. The birdwatcher style cabin keeps the crew dry in a chop and makes the boat self righting. 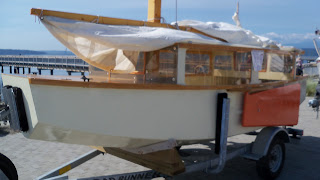 Tom's 15'-8" Jonesport Peapod has a 65 sq ft spritsail and gets its lines from Am. Small Sailing Craft. The original of this Peapod was built in 1975 in cold-molded cedar. This boat came from a mold of the original. 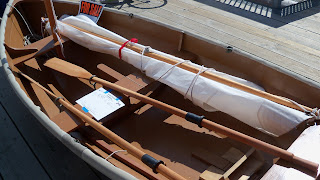 This 11' 150 lb Rich Kolin designed Heidi Skiff was built by the Northwest School of Wooden Boatbuilding. 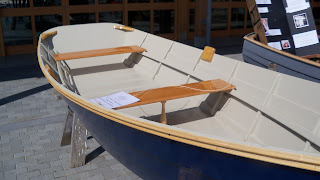 A coolidge centerboard daysailor built and for sale by the NW School of Wooden Boatbuilding. 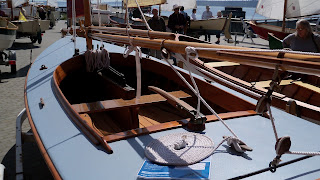 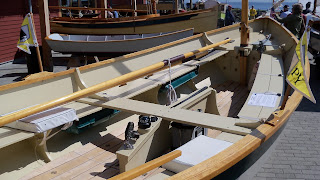 Chelcie's charming 11'-1" dinghy "Puff", inspired by George Holmes' 1888 Ethel from Sail and Oar, scaled down to make her a shorter and lighter boat. 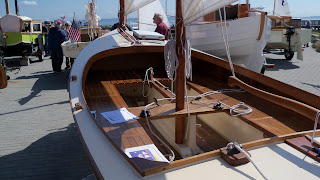 John built this 17'-6" adirondack guideboat in 2009, extended from the usual 15'-16' for racing.  Strip built from patterns of a design that was built by William McCaffery, a hunting guide and hotel owner during the early 1900's in the Adirondack region of upstate New York. 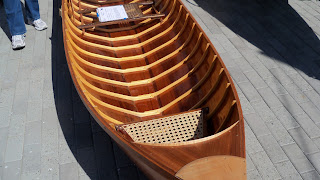 Andrew's Bolger designed Bobcat "Bob's Cat", converted to a cruiser with a cabin and other modifications, recently purchased from Bob by Andrew to learn to sail. 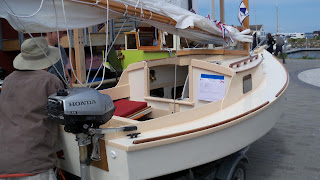 Several others were on display on the beach and there for the Small Craft Skills Academy.

The first ever Pocket Yacht Palooza was a great success and I'm sure it will become an annual event!

Update:  Many more nice photos from the Palooza can be found here.
Posted by Joel Bergen at 3:27 PM