Saturday, the busiest day of the Festival.


I headed over to sign up for a rowing/sailing trip aboard the longboats. These longboats are replicas of the longboats used by Captain George Vancouver to explore the Puget Sound region in 1792. I've been wanting to take a tour on them for years, but haven't been able to until now because they were either full or there were too many other things to see and do. There are so many things to do at the festival there is no way to do them all. 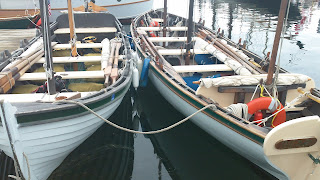 These 26' replica longboats are used by the Northwest Maritime Center School Programs. They are each equipped with 8 rowing stations and 3 dipping lug sails.  They are used to teach youth teambuilding, problem solving, and maritime skills.  Teenagers attend intensive 2-5 day programs of discovery and exploration where they learn to row, sail, learn navigation, compass use, knots, marine biology, history and more.  They are also used in the Pacific Challenge. 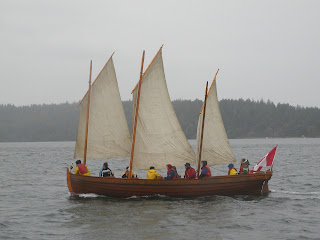 Fortunately, we had several of these teenage students aboard to help us learn to row in sync and teach us how to tack the three sails on our dipping lug rig.

The first lesson we learned was "Crab!".  "Crab!" is what you yell out when the rowers get out of sync and get their oars all tangled up, which usually brings all four rowers on that side to a halt.

To prevent Crabs, one rower is designated as the pace setter.  From the rower's point of view, it's the rower on their right and all the way up front. The rowers are all facing aft of course, so that would make him the aft-most port-side rower.  Anyway, the rower to his immediate left is supposed to row in sync with him.  The rest of the rowers are all supposed to keep in sync with the rower seated immediately in front of them.  Sounds simple, right?  We had lots of Crabs.  All it takes to create a Crab is for one rower to lose focus for a second or two.

Tacking the dipping lug rig involved a complex sequence of  tacking the halyard, the sail tack, tacking the sheets, lowering the sail and dipping the yard, that I still don't fully understand.  It was unlike anything I'd ever done before and required about 3 or 4 people on each sail.  I loved it!  I wish I were a teenager so I could sign up for these programs.  I also have a new found respect for the crew of these longboats. After only a half hour of rowing, my hands were numb and my back started to ache.  Vancouver's explorers often rowed for hours upon hours exploring and charting the miles of coastlines here.  Here's a bit of video.  It's not very good.  These are working boats.  You're always rowing or sailing, or trying to stay out of the way of other boats.  There is very little opportunity for filming.