My son Tim and I just got back from one of our favorite annual events - the Sucia Small Boat Rendezvous at Sucia Island State Park.

Like the last two years, we launched at Sandy Point Shores marina.

The entrance to Sandy Point always makes me a bit apprehensive. The narrow and shallow entrance goes through a blind S-curve, which then opens to a shallow area with a 270 degree exposure to the vast Straight of Georgia.  During an ebb, the tidal current rushes through this S-curve like a river.  At low tide, there is barely enough room for one boat at a time to fit through the entrance.  You have to approach slowly and peek around the corner to see if there are any oncoming boats, then zip through if the coast is clear.

We launched at 10:00am.  The worst possible time.  Right near the end of a minus tide with a swift outgoing current due to an 11.3' tidal change.

We should be Ok, I figured.  After all, Navigator only draws 6" of water.  In the back of my mind, I wondered if that was still true when fully loaded with two people and a week's worth of camping gear.

As we approached the entrance, I idled the motor, double checked that the centerboard and rudder were fully up, and cautiously peered around the corner as I slowly crept toward the entrance.

The swift current immediately grabbed Ellie and swept us into the narrow channel. I instantly realized that the current was so strong that there would be no turning back. I'd be using the motor to try to stay in the middle of the narrow channel and not much else. I shot a quick glance for oncoming boats, fortunately there were none, thank goodness. The channel looked too narrow for two boats to pass and there was no room to maneuver.  We were going through, no two ways about it.  Along both shorelines we could see about a dozen spectators, waiting to watch the next fool to try and shoot the rapids.  Up ahead the water looked "funny".  Ripply.  What'd that mean?  Shallow?  Must be shallow.  How shallow?  I glanced over the side.  Gravel!  Crunch! 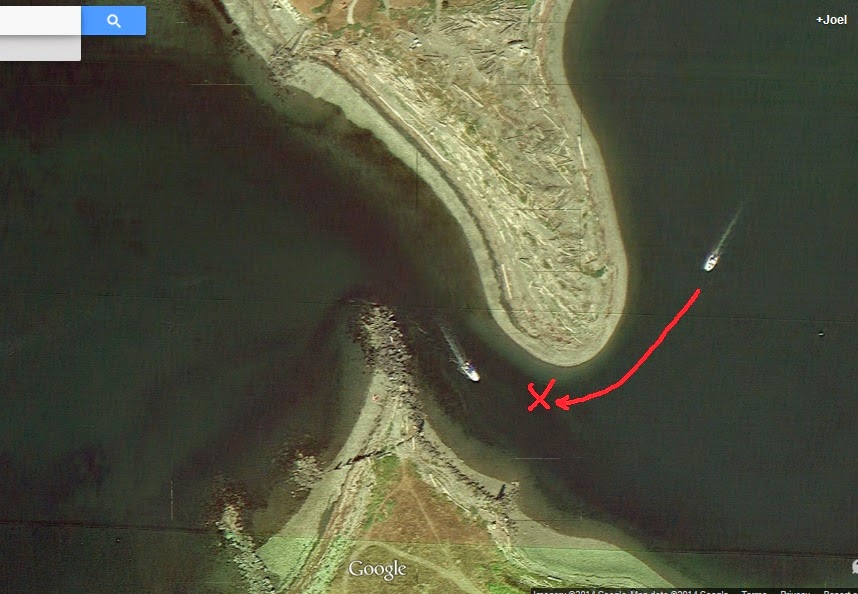 We were aground in the middle of the narrow channel with a swift current all around us.

Ok, now what?  Think.  Tide's going out. We gotta get out of here or we'll be stuck here for hours, or until the next boat comes along and hits us.  Should I get out and push her off?  Probably a real bad idea.  The strong current would most likely rip the boat from my hands.

I looked over the stern.  The prop was still above ground.  "Ok, Tim, we're gonna try and back our way out of this.  Hope it works".

I turned the motor around and gave it half throttle.  Nothing.  Gave it full throttle.  Our mighty 2hp outboard was giving it everything it had, but still nothing.  Still stuck.

"Tim, let's try shifting our weight around".  Ellie slowly started to move, then broke free!  We backed a safe distance away from the gravel bar and took a couple minutes to regain our composure and assess the situation.

Looking more closely at the water, we could see that it was shallow and ripply on the right, but on the left, closer to the opposite shore, it was clearly deeper.  But then it shot directly into a rocky breakwater.  "I think we can make it, Tim.  We'll have to hug the left shore, then quickly zip over to the right at the last second to clear the rocks, then we're home free".  Tim agreed, it looked doable.

So we checked again for oncoming boats, then cranked up the Honda to half throttle (full speed for Ellie) and rocketed through the channel.

Whew.  Made it!  Next time, we vowed, we'll pay closer attention to the tides.


After that ordeal, we were rewarded with many hours of  absolutely perfect sailing conditions.  We saw lots of dolphins.  One surfaced less than 20' from the boat.

We arrived at Sucia and set up camp.  This was our first opportunity to try out my new Anchor Buddy - a Father's Day gift from my daughter Heather.  Thanks, Heather!  It works great. 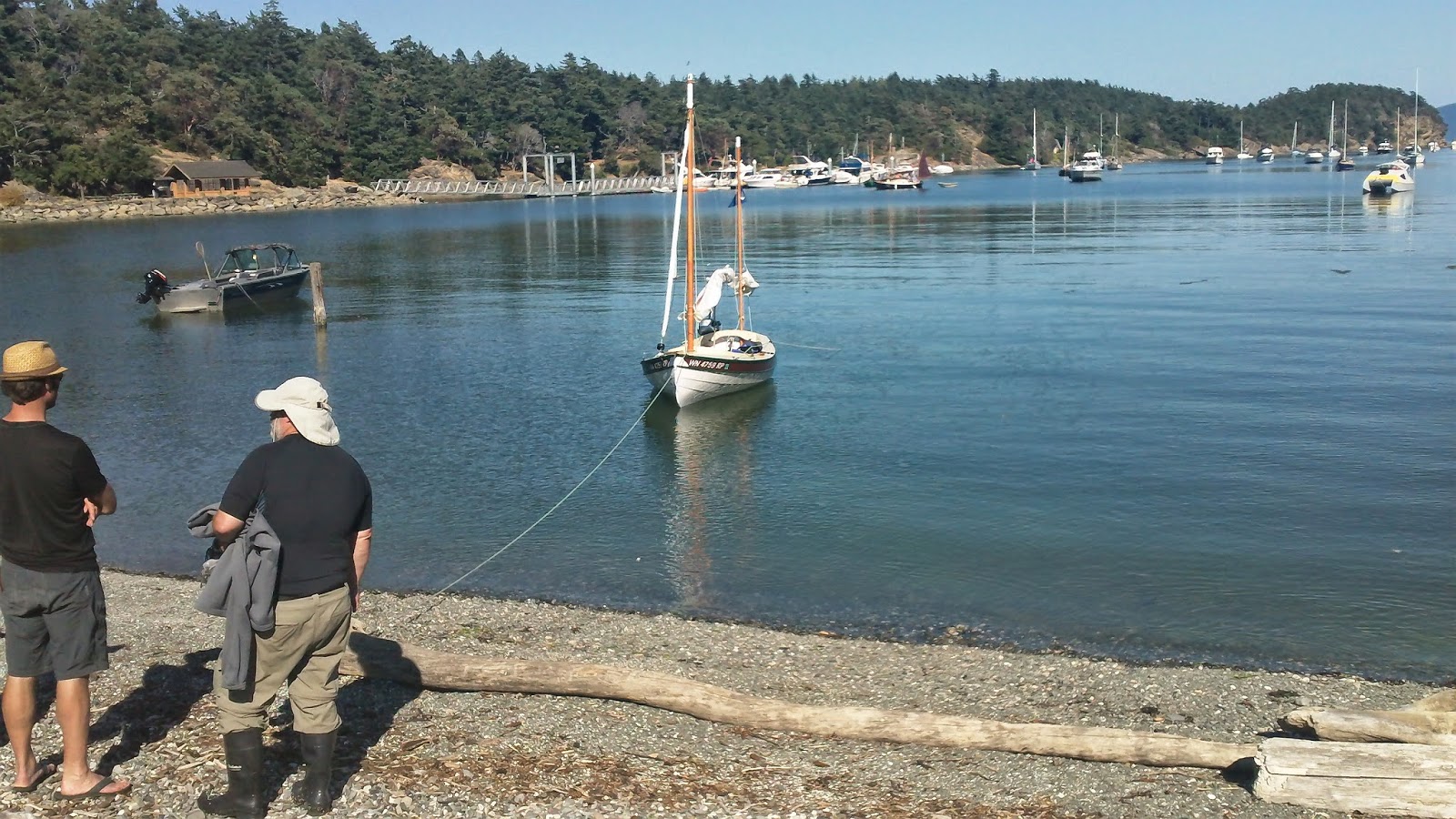 That's Cameron I'm talking to.  Cameron and his son take a month off every summer and stop by Sucia for the rendezvous.  They sail a beautiful Wayfarer. 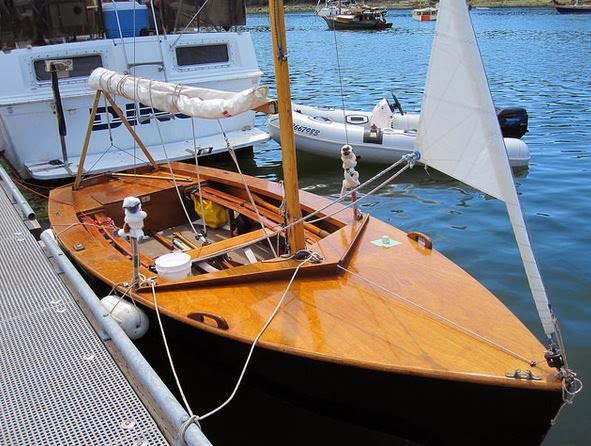 Jamie Orr, organizer of the event, always brings along a set of bagpipes, which he uses to greet arrivals, wish them farewell, or summon the group to various get-togethers like wine and cheese night, campfire gatherings, and the around the island race.  Boaters all around the island applaud using their horns.  In this video clip is Bob Ennenberg (Scram Pram "Duck"), Jamie Orr (Chebacco "Wayward Lass"), Paul Miller (Benford Friendship sloop "Friendship") and Dan Rogers (Balboa 16' "Ladybug").  Dan is organizing an 8-day Movable Messabout in Eastern Washington and Idaho that I am looking forward to attending.
Here, Jamie is summoning the group to celebrate the 11th anniversary of this Rendezvous, with a fine bottle of single malt scotch.

There is so much more to write about, but it is getting late.  I will write some more soon.  In the meantime, I hope you enjoy this most beautiful sunset.