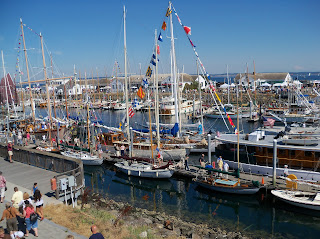 The 35th Annual Wooden Boat Festival at Port Townsend was, in a word, magnificent!  I have been attending this festival for many years now.  It was two years ago when I met Barrett Faneuf here, she invited my wife and I out for a sail aboard her Navigator "Yuko", and the rest is history.  The festival seems to get a little bigger and a little better with each passing year, but this year's festival took a quantum leap for me.  Not only was it my first time as an exhibitor, but I had the honor of meeting people such as John Welsford, Howard Rice, Josh Colvin (editor of Small Craft Advisor magazine), Sam Devlin, and a surprising number of people currently building Welsford's designs.

But more on that later.

There is no way to compress all four days of the festival into one blog entry.  It's going to take several. Let's start with the pre-festival setup.

Ellie, of course, wanted to look her best, so I spent the weekend prior to the festival getting her in "ship shape".  I touched up the few scratches she had picked up from the barnacle encrusted rocky beach at Sucia, cleaned off the bits of dried seaweed from her most recent outing to a TSCA messabout at Bowman Bay and gave her mahogany seats a fresh coat of Seafin oil.  We even bought her a pretty little bouquet of flowers for the show. Ellie is a tomboy, but she didn't seem to mind.

Thursday, the busy setup day before the start of the festival, finally arrived.  We set out early because we had to tackle a bit of Seattle's morning rush hour traffic, take a Washington State ferry, and cross a major drawbridge just to get there, then set up the boat, launch her at Boat Haven marina, travel over to Port Hudson marina, and report in all before noon.

Here is Ellie, gleaming aboard the Edmonds-Kingston Ferry. 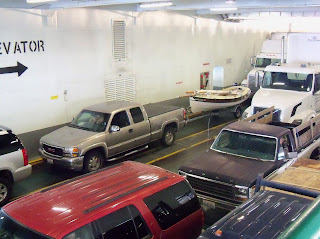 For those of you not from around here, the Washington State Ferry system has the largest passenger and automobile ferry fleet in the U.S. and the third largest in the world based on number of vehicles carried - about 11 million vehicles per year. 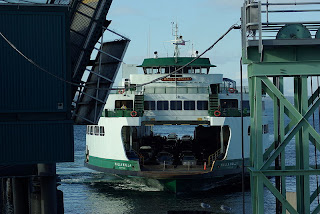 After the ferry crossing, and wait for the Hood Canal bridge to close, we finally arrived at Boat Haven marina.  At the boat launch was Peter Van Sickle with his Welsford Penguin "Tenacious".  Peter, who trailered over from Idaho, completed his Penguin about two months ago.  After launching our boats we headed for the festival at Port Hudson.  Here I am admiring "Tenacious". 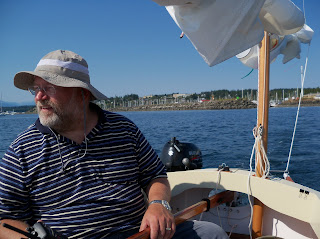 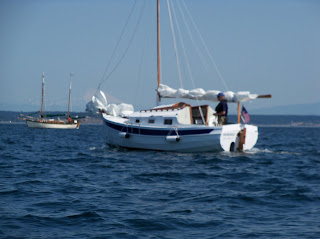 Upon arriving at Port Hudson, we were instructed to contact the Harbormaster on VHF radio for our slip assignments.  Squeezing a couple hundred boats into Port Hudson in an orderly fashion is no easy task. More like a gigantic game of Tetris.  Harbormaster Dan Evans of the schooner Adventuress did a remarkable job.  What I didn't know was that they place all the larger yachts first.  Because we arrived fairly early we were forced to sail under beautiful, near perfect conditions for several hours while awaiting our turn to enter the harbor.  Feel sorry for us?  Don't! 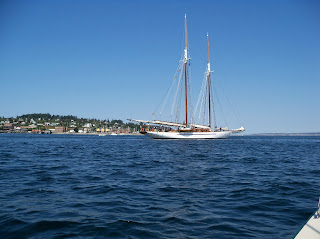 At last it was our turn to enter and we tied up at our assigned spot. 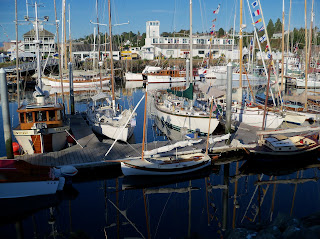 Here is a panorama of all of us shoehorned in snug and cozy like.  Well done harbormaster!

At this point I had to make a quick side trip to check into our hotel, then hurry back for the reception. We were treated to a thank-you reception, complimentary drink, music and dancing at Bar Harbor (a large tent on the Western edge of the Festival where they serve beer, wine and have live music all day) that went on until after midnight.

Next up: The Festival begins.  A momentous sail with John and much more.  Stay tuned!
Posted by Joel Bergen at 2:07 PM