Dawn, Saturday, the busiest day of the Festival, had arrived.  I spent most of the day aboard Ellie, answering questions, but occasionally sneaking off to watch presentations and view the other boats. 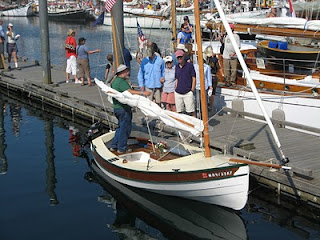 The Main Attraction today, for us Welsford fans anyway, was Scamp.  Howard Rice did an amazing talk. I wish I could have recorded it. The adventures Howard had taken aboard small boats are jaw dropping. He has gone around Cape Horn, both ways, in a sailing canoe, which ranks as one of the most epic journeys ever undertaken in a small boat.  No, he's not crazy.  Just the opposite. He trains Navy Seals in small boat handling.  Small Craft Advisor magazine did a series of interviews with Howard in issues 58 through 63.  In his presentation, Howard talked about his past and about the tests he had done aboard Scamp.  Howard was having a microcruiser designed for him by a French designer, but replaced it with Scamp hull #3.

John Welsford did another outstanding talk later that day entitled "The Designer's Role: More Than Just Drawing".  This time I brought my camera and recorded the talk.  Unfortunately the room was packed.  My seat was near the back of the room, too far away to make a video, and the audio is not the greatest quality either.  But if you crank up the volume, it is well worth listening to.  John talks about the Designer's role, which is turning your dreams into reality, and about how he designed Scamp to fulfill the specified design criteria.

I missed the majestic Schooner Cup races this year.  I was at John's talk instead. There are so many things to see and do at the festival that it's impossible to see them all.  Here is a little bit of the race.
I've been toying with the idea of building a cedar-stripped kayak or canoe. I know next to nothing about kayaks, but the cedar strip kayaks at the festival are just so beautiful, and they look like they would be a lot of fun to build.  I went to Joe Greenley's Cedar Strip Canoe & Kayak building demonstration.  I went away from the presentation thinking they didn't look too difficult.  A typical kayak uses a quarter mile of cedar strips!

The musical entertainment at the festival is fun. There is live music at Bar Harbor all day long. Here is a sample from "The Whateverly Brothers".  Many people play their instruments on their boats and they are quite good and a lot of fun to listen to.
These boats are replicas of the longboats that Capt Vancouver used to explore Puget Sound in 1792. Every year I kick myself for not signing up early enough to go out for a rowing and sailing tour aboard them. Next year for sure!

Here's his latest contraption he built for his Devlin cutter Eider.  It keeps his full-keeled Eider comfortably upright on the beach while the tide is out.  They say the tide waits for no man.  Well, Kirk waits for no tide!

Here are a few more photos that I took of a few of the boats. This is a tiny, tiny fraction of the boats at the festival, which number in the hundreds. I really wish the festival was a week long instead of only three days!