The Port Townsend Wooden Boat Festival seems to have a different atmosphere each day.

Fridays are my favorite day. Friday seems to bring in more of the amateur boatbuilders, eager to attend the festival as early as possible in order to beat the weekend crowds and get more one-on-one time with the exhibitors.  I really enjoy the relaxed atmosphere on Friday. I made this video clip to give you an idea of what I mean.

Saturday is the busiest day, drawing people from all walks of life, with the full spectrum of interests.  Sunday, the final day of the festival, seems to bring in many of the locals whose friendliness knows no bounds. It gradually builds in anticipation of the spectacular grand sail-by, cheered by thousands of spectators along the shore, immediately followed by thousands of fond farewells.

On Friday I alternated between answering questions on Ellie and sneaking away to look at the other boats while waiting with great anticipation for John Welsford's talk at 12:30.

Having already taken a peek at Peter's Penguin "Tenatious" at the boat launch, I figured this was a great time to go see the other Welsford boats at the festival: A Scamp and a Walkabout.

First up was Scamp.  I will be writing much more about Scamp in the future.

And nearby was "Puddles", Rick Thompson's Walkabout. Puddles is built as a coastal rowing boat. She is stretched to 17' 10", and has seat rails and removable seats and foot stretchers to allow one or two slide seat rowers. She was launched in May 2010.  Her home waters are San Francisco Bay, the Sacramento Delta, and lakes of the Sierra Nevada.  The workmanship is impeccable. 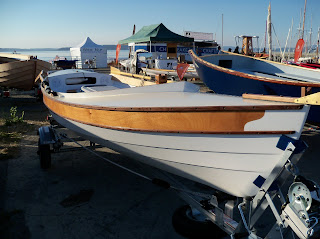 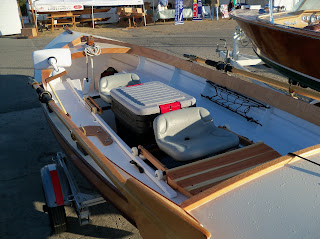 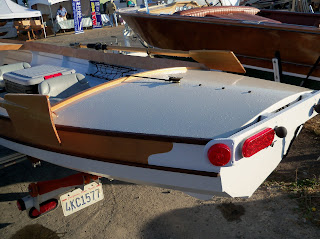 I met John Welsford at the Small Craft Advisor tent and spoke with him briefly. He had a very busy day scheduled.  John's talk at 12:30 was about the history of recreational boating.  The talk was fantastic.

There was an "Under 26' wooden sailboat race" scheduled from 2:30 to 4:00, with a skipper's meeting at 1:00 to go over the details.  I missed the skipper's meeting because I was at John's talk. No matter - I'm not a racer (I've never raced in my life) but I got this crazy idea to invite John for a sail just to watch the race. To me, dodging the racers is much more fun than racing with them.  So after his talk, I invited John out for a sail, and much to my utter delight, he accepted!  In the last few days, John had survived traveling halfway around the world in coach, gave three talks, and met hundreds of people. I couldn't tell for sure behind that beard, but I suspect John was ready for a little sailing vacation from his vacation!

So off we went to dodge the racers!  As soon as we left Port Hudson marina, I turned the tiller over to John. 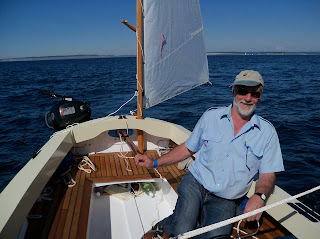 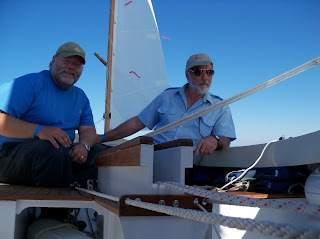 I asked John how many Navigators he'd sailed.  He said he'd sailed twelve.

I ask how "Ellie" compared.  He said they all sailed very much the same, but had subtle differences.

I then asked John to let me know if he sees anything that needed to be adjusted or changed.

"You're going to want to move your jib fairlead aft about a handspan and a half.", he said.
[note: this would put the jib fairlead right at bulkhead 4]

"Really?", I said, puzzled. "Oh, is that because I shifted the jib higher up when I added the furler and turnbuckle?

John said "You see that curvature you have along the foot of the jib?"

John studied the jib for a few moments, then said, "Take the jib sheet out of that fairlead and lead it right back here to this camcleat."

I did as John instructed and looked at the jib. It now had a nice even airfoil shape along its entire length.

"That's better", said John "You could still use the other fairlead location for light air if you like, but moving it a handspan and a half aft looks just right."


"Do you normally sit back there?" asked John

"Here, take hold of the tiller"

"Now let go the tiller. What do you see?"

I let go and the tiller moved slowly to port.

"A slight weather helm", I said, taking the tiller again.

"Right. Now shift your weight forward, all the way up here and let go the tiller."

The tiller moved slowly to starboard this time.

"These boats are quite sensitive to crew weight. The boat will sail it's fastest when properly balanced. You're a big guy so you are going to want a tiller extension so you can sit up here near the center."

I gave John the helm again, and sat further forward. 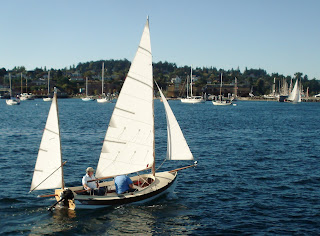 We sailed for several more minutes. John tacked occasionally while I daydreamed, soaked in the sunshine, and gazed at the variety of other beautiful boats in the race.

Meanwhile, Ellie seemed to be sailing faster than usual.

John tacked again, this time just ahead of a familiar gaff sloop.

"You see that?", said John, "Earlier we passed astern of that boat.  This time we passed ahead of him."

I didn't realize it, but John had joined the race.  Not only that, but with two expert adjustments and his experienced helmsmanship, John was overtaking a boat that had an advantage in length over us.  Remarkable!

Thanks, John, for generously sharing your time and wisdom with me.


After our sail, John and his lovely wife Denny met with our local TSCA group at Bar Harbor.

Next up: Saturday - the busiest day of the festival. The boats, the events, the maritime center, and much more.  Stay tuned!
Posted by Joel Bergen at 10:02 PM