The crowds on Sunday morning, the final day of the Festival, were light.  This finally gave  me an opportunity to take a closer look at some of the magnificent boats in the Festival.

Here is a small sampling of boats selected more-or-less at random.

Joshua is a historical replica of Joshua Slocum's gaff-rigged yawl Spray, which was the first vessel solo-circumnavigated by Slocum in 1895. Joshua's hull and deck were built in 1982 by Bill Elliott of Bay, Ship and Yacht in California. Owner Wm. Harpster completed the rest of the vessel, including rigging, interior and exterior construction. Joshua's maiden voyage was in San Francisco Bay in 1983. 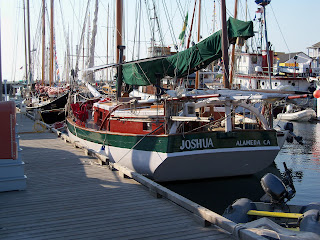 The Poulsbo 16 was one of the northwest's best known small fishing boats. They were used in resorts, as rentals, and for pleasure. Ronald Young designed and built the sturdy craft in Poulsbo, WA (1933-65). The original owner of this boat was Doc Shelton (1946) and the second owner was Howard Jones (1965).

The 1913 Clift engine was rebuilt by Dale Fye and painted International Harvester red. The transmission was rebuilt by Mike and painted Detroit Diesel alpine green. The exhaust was changed from the starboard side to the transom. A heat exchanger cooling system was designed and installed on the port side of the motor. The auxiliary bilge pump was then installed followed by the wiring and the fuel system. Restoration was completed in the fall of 2010. 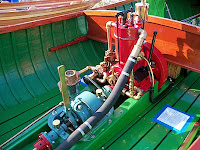 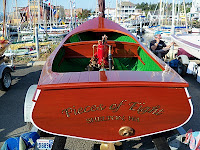 Nordso is a wonderful modern rendition of the classic North Sea Trawler, designed and built by Christian W. Dahl as a pleasure craft. She was first launched in 1985 on Lake Minnetonka. She has Port Orford planks on white oak frames , mahogany cabin and teak decks. She is powered by a Westerbeke 38B4 diesel and has been recently dressed up with new Hasse sails and new boom for better performance. Nordso was featured in Wooden Boat Magazine # 74. The new handrails, stantions and rails are being crafted and fitted by The Port Townsend Foundry. Sails by PT Sails. Mike Baldwin and Tricia were responsible for the restoration in recent years and the Nordso Foundation is in part the continuation of Mike's dream and environmental activism, following his passing after the 2010 Wooden Boat Festival.

Nordso is the primary vessel for educational programs of the Nordso Foundation, the boat is used to gather plastic waste from the waters of the Salish Sea and Pacific and spread the word about ocean health to youth of all ages.


My good friend Larry Cheek began building "Nil Desperandum," a Devlin Winter Wren II in October 2008 and completed her in 2011 after approximately 3,000 person-hours of labor. The hull is Okoume marine plywood sheathed in fiberglass/epoxy, the spars are Sitka spruce, and all other structure and trim pieces are white oak, khaya mahogany and vertical-grain fir.

"Nil Desperandum," which appears in an ode by the Roman poet Horace, translates as "Nothing to Worry About." Larry looked at the name every day during construction as a reassuring morale-builder. He says it didn't work. 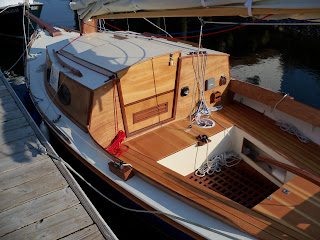 Dance Me is a Nancy's China, a Sam Devlin design, built with the stitch and glue construction method. She is a fine sight with her tanbark sails, blue hull and white topsides. She is easy to sail and easy to maintain. When the winter storms come she resides on a trailer in the back of her owner's rose garden. The rest of the time, she is in the marina in Port Ludlow. 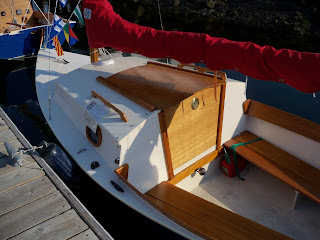 JO E 3 is a 1958 Elgin. Purchased new and still owned by original owner Carl Moushey, the boat is currently being completely restored as a surprise for his father. 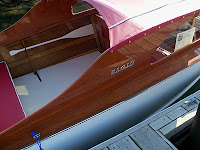 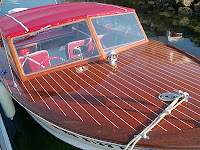 Milagro was purchased in 2000, severely damaged from poor storage, The owner fell through the deck when he first stepped on board. Taken completely apart down to an empty hull and totally rebuilt and restored back to it's original state. The fiberglass deck was replaced with a teak overlay. The Perkins engine was rebuilt and all the original hardware restored or replaced. A new rigid dodger was designed and installed in the lines of William Gardens style. The boat has been in the water one year now and sails beautifully. 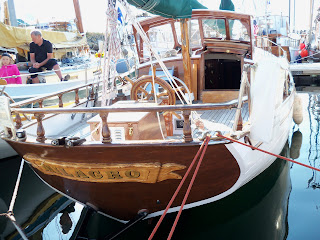 Steam Launch Puffin was built in 1906 by the Truscott Boat Works in St. Joseph Missouri. She was powered by an early gasoline engine, though her hull design, a “Compromise” model, was originally intended for steam power. Her construction is oak planks over cypress frames.
She was found derelict, restored and converted to steam power in 1975. After changing hands, she was eventually donated to the Center for Wooden Boats by Bob Evans of Missoula, MT.
Steam launches like Puffin were popular in the 1880’s, when the only other options for propelling boats were rowing and sailing. Although Puffin’s steam power plant is relatively new, it is practically indistinguishable from a steam plant from the earlier era. Her boiler burns wood, usually scrap from the Center’s boat shop. A bushel basket of wood propels her for about an hour. Puffin’s original boiler wore out in 1999, and was replaced with a duplicate built to current boiler codes. Her original steam engine was damaged several years ago and was replaced with the current one in 2001. Volunteer machinists built the current engine from a commercially available kit. Puffin’s power plant, while modern, closely resembles a typical steam power plant used in steam launches in the 1800s. 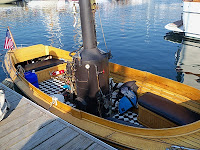 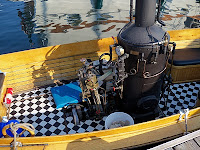 Tenacious is the Penguin model designed by John Welsford of New Zealand. The boat is a trailer sailor, 21' LOD, and will be moored on its trailer to enable exploring all of the large lakes in the Northwest and Puget Sound. For a 21' boat there is plenty of room for a couple or a Granddad to take his grandkids for comfortable explorations. As with all Welsford designs this boat has a reasonable turn of speed with lots of buoyancy. 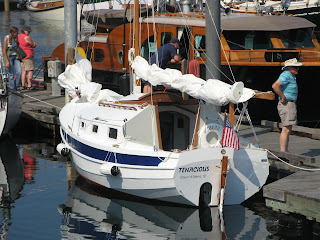 The Jean Alden is modeled on the traditional Cape Cod catboat. Mike Higgins  started with Phil Bolger’s design for the twelve-foot Bob Cat, scaled it up to fourteen feet, added a small cabin and copied the rig from a Crosby catboat described in a monograph by Barry Thomas. He also modified the stem profile to have the tumblehome that is characteristic of this traditional design. He built her in his garage and driveway over a three-year period, starting in July of 1997.

The primary hull construction is Okoume plywood reinforced with epoxy impregnated fiberglass cloth. The deck and cabin top are laminated Douglas Fir and Red Meranti strips over Okoume plywood. Cabin sides and coaming are tongue-and-groove Douglas fir. Cockpit seats and sole are Okoume plywood. The stem and other deadwood are laminated Red Oak. Cap rails are Iroko. The spars are hollow and constructed from Douglas fir with birds mouth joints. Fastenings are silicon bronze and epoxy. One Christmas vacation, Mike used a large conference room at his job as a loft for making the sail. 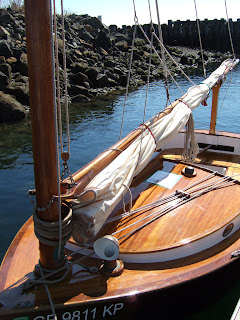 As you can see, the festival boats come in all shapes, sizes and types, but they all share one thing in common. Every boat begins with a dream.  All of these boats encompass the love, the devotion, the dedication, the hopes and the dreams that their owners bestow on these beloved craft.


Ships are the nearest things to dreams that hands have ever made,
For somewhere deep in their oaken hearts the soul of a song is laid;
A soul that sings with the ship along through plunging hills of blue,
And fills her canvas cups of white with winds that drive her through.
For how could a nail and a piece of wood, tied with a canvas thread,
Become a nymph on moon-washed paths if the soul of the ship were fled?
Her bosom throbs as her lover's arms clasp her in fond embrace,
And the joyous kiss of briny lips is fresh on her maiden face.
No storm can smother the hempen song that wells in her laughing throat.
Small wonder then that men go mad for the love of the sea and a boat.
For the singing sheet is a siren sweet that tugs at the hearts of men,
and down to the sea they must go once more though they never come back again.
- Robert N. Rose
Next up: the Grand Sail By
Posted by Joel Bergen at 9:42 PM