The first step in building a Navigator, according to John's plans, is to scarf together two sheets of 9mm plywood to make the bottom panel. Unfortunately I was working in a 1-car garage at the time, with plans to enlarge it later, so space was at a premium. I wanted to work on some of the smaller pieces first, saving the larger bits for later when I had the space to deal with them. So I jumped ahead to step 3, bulkheads. I guess you could say that things already weren't going according to plan!

John's dimensioned plans are drawn at 1/5 scale. I needed a way to get them drawn full sized on the plywood, and I also needed a way to arrange the pieces on the plywood to minimize waste. I decided to draw the bulkhead pieces in a CAD program. This, I thought, would allow me to print out full sized templates and also play around with arranging the parts efficiently.

To make a long story short, this turned out to be more effort than it was worth. When I printed the templates, they didn't print exactly right. There was some distortion in scale that took me a while to sort out. Also, arranging the parts on the plywood on the computer was time consuming and cumbersome.

I eventually got the templates to work. 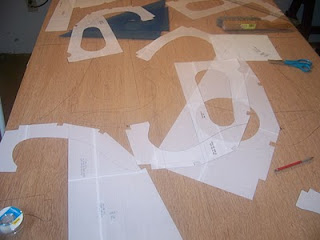 As for the parts arrangement, I found a far more simple solution: I simply traced the parts from John's plans, onto some tracing paper, cut out the parts with scissors, and arranged them paper-doll style on top of a piece of construction paper sized to 1/5 the size of a real 4x8 sheet of plywood. 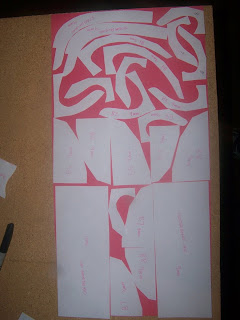 I traced the templates, then the bandsaw quickly made a nice stack of bulkhead parts. 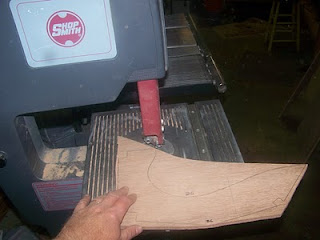 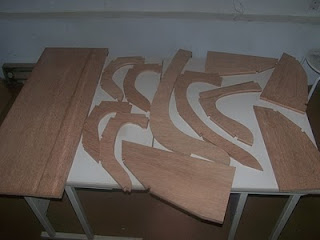