The garboard plank on the Navigator is in many ways the easiest plank, and also the hardest to install. The aft half of the plank is quite flat. It is spliced together with nice friendly butt blocks - no scarfing is necessary. The plank is quite uniform in width. The entire lower edge of the plank is attached to the lower panel using the ever popular stitch-and-glue technique.

The forward half of the plank is a another story. It makes a near 90 degree twist while curving around the bow and increasing in width, culminating with an attachment to a contoured stem with a rolling bevel.

Let's start with the easy part. 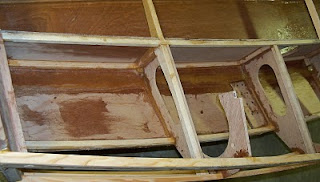 Here is a section of the garboard plank from the transom through bulkhead 7. To make the plank, first we measure the greatest width between the bottom panel and the stringer and add about 50mm. Measure the length and add about 50mm. Cut a rectangular piece of plywood to that size. Clamp it to the boat. Trace the profile of the lower plank and stringer onto the panel. Cut the panel to the profile. Epoxy the panel to the boat. The joint between the lower panel and the plank gets stitch-and-glued, which means it is temporarily stitched to the lower panel with wire ties or bailing wire, dabs of epoxy are applied between the stitches. When the epoxy dabs cure, the stitches are removed, a fillet of epoxy/wood flour is applied over the joint, which is then covered with fiberglass tape and epoxy. There are two splices in the panel. Both splices are hidden under the seats, so there is no need to bother with scarfing the plywood joints. Simple "butt blocks" are glued over the top of the joint, held in place with temporary screws until the epoxy sets.


At the bow, the panel has to twist from near horizontal to vertical 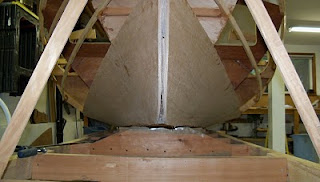 It's hard to believe that plywood can actually do this, but it can.

The drill starts out much the same as before. Cut out an oversized panel and clamp it to the boat, slowly and carefully bending it into position so it can be traced to actual size and then be installed.

So first we clamp it in place at the aft end, making sure we overlap the lower panel, stringer, and the aft panel. 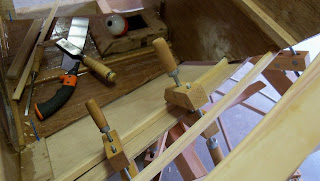 Then we work our way forward, applying more clamps and carefully and evenly apply pressure to the panel. 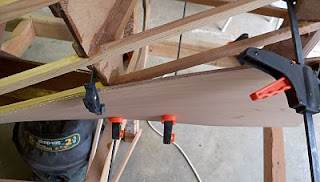 At this point I noticed that the panel was riding quite hard on the front, lower edge of the stem. I forgot to take a photo, but you can see what I'm talking about in this diagram. I had to remove the panel and plane off some additional material in this area until the panel fit properly. 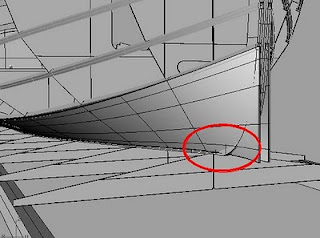 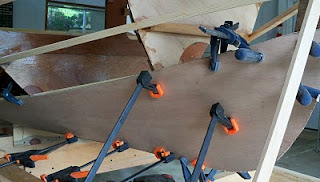 Another shot of the spreader clamps. 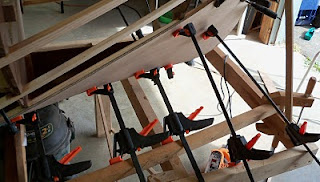 Finally the panel is in position.  Now trace around the lower panel, the stem, and the stringer onto the garboard panel. 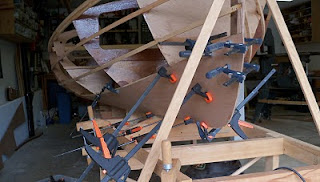 Remove the panel and cut it to the traced profile. 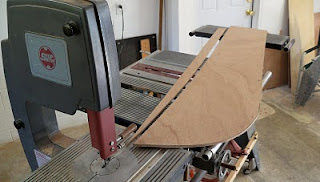 Re-install the panel and re-clamp it to its final position. Stitch the garboard panel to the lower panel. Bailing wire or copper wire stitches work better than plastic ties in this area.

Glue the panel in place and repeat for the other side. 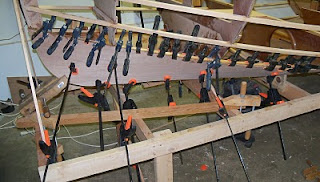 All I have left to do is finish the stitch and glue fillets and tape, and add the butt straps. 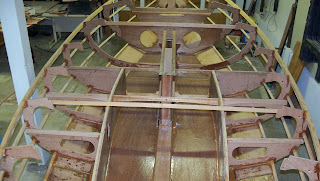 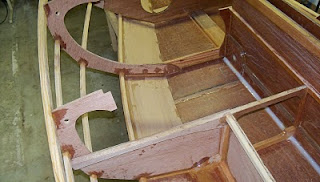