Before the next set of panels can be installed, there is some prep work to do. First, I had to mark where the bottom of the next panel will go so that I could cut the bevel in the lower panel. The panels overlap by 20mm which is the same width as the stringers. I made this simple jig with a pointer that rides along the top of the stringer and it holds a pencil 20mm away that draws the line on the lower panel. 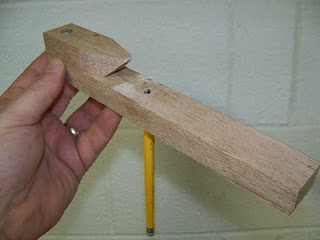 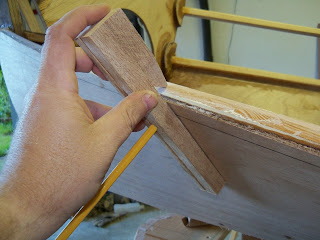 The bevel has to go from this line the stringer above it. 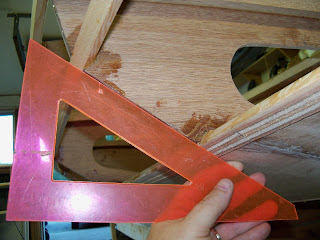 I cut this bevel by aligning the two stringers and the plane by sight. Plane off some material and frequently check the progress. 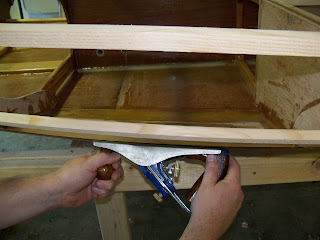 Keep planing away material until the bevel reaches the line and it looks like this: 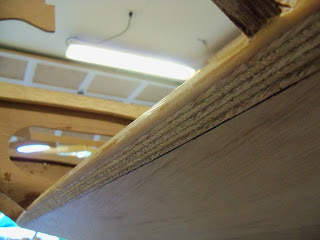 At the bow, the overlap between the two panels blend together with a tapered half-lap joint called a "gain". Gains can be cut many different ways. Often they are cut by hand using a saw followed by a chisel and finished off with a rabbet plane. I decided to cut the gains using a router, and I cut them in the panels before installing them on the boat. I didn't have much confidence in my ability to cut them by hand and I knew a router would be much faster and more accurate.

To use a router to cut the gains, I first had to come up with a jig. This is the jig, which I call "The Gain Machine". 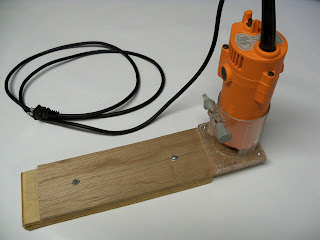 The jig is made from two scraps of wood. The lower piece is made from 3/4" (20mm) stock and it has one pointed end cut at 45 degree angles, which I'll refer to as "the pointer".  The pointer rides along the edge of the panel to control the width of the gain. 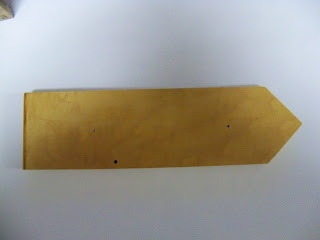 The other piece is made of a scrap of 1/4" (6mm) plywood. The base for the router is attached to one end.  It has two slotted holes for screws and washers that attach it to the lower piece and allow the position of the pointer to be adjusted. The router is a trim router that I got from Harbor Freight Tools on sale for $20. 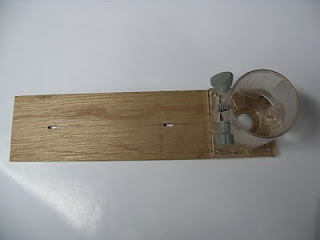 After assembling the two pieces, put a 3/4" (20mm) diameter straight router bit into the router. If you don't have a 3/4" bit, a smaller bit could be used but you would need to cut the gain in multiple passes. Adjust the pointer so the distance from the tip of the pointer to the far side of the bit is equal to the desired width of the gain.  In my case, the bit and gain are both 3/4" so the pointer just contacts the bit. 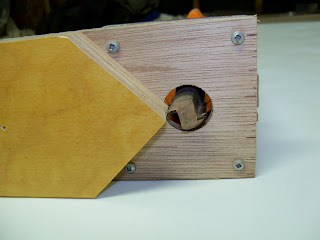 Set the depth of the bit so that the bottom of the bit is raised up by an amount equal to the thickness of the plywood panel (1/4" or 6mm in my case). 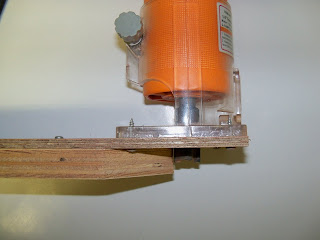 Now the jig is ready to cut gains.  Here is a video of the Gain Machine in action.
I don't see how cutting gains could be any quicker or easier than this!