Yesterday I finished installing the stringers. Well, sorta finished. There are actually two more stringers to install that form the inner edge of the side decks, but they don't get installed until after the planking and seat tops are installed. It seems like they could be installed now. But now that I have shop space, I figured I'd try to actually start building things in the proper order for a change.

Anyhow, installing the (let's call them Outer Stringers) was rather uneventful. I bought several clear douglas fir boards from Lowes for a fraction of the price that the lumber yards wanted. They were nice clear boards, straight grained without a single knot or split. I proceeded to rip them into 3/4" (20mm) square strips (for the gunwale stringers) and 20mm x 15mm strips for the remaining stringers. I then scarfed them and epoxied them together with epoxy/silica mix to form 20 foot long stringers.

I had three concerns about the stringers, after reading other builders' blogs.
Maybe I just got lucky, especially considering I was using cheap doug fir from Lowes, but I had no problems at all.

I just jumped right in and torqued and twisted the stringers into place at the stem, fully expecting them to break, but they didn't.

For the gunwale stringers, I took the advice of other builders and made the stringer from two seperate 20mm x 20mm stringers. Again, they went right in without a hitch. 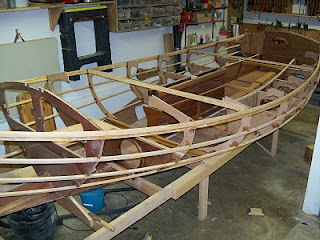 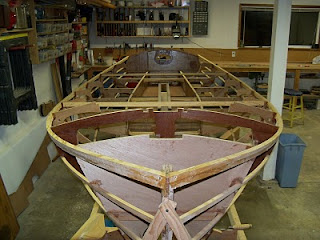 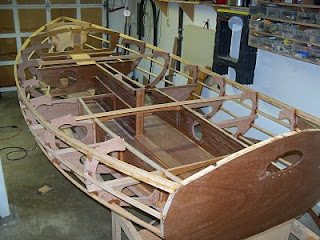 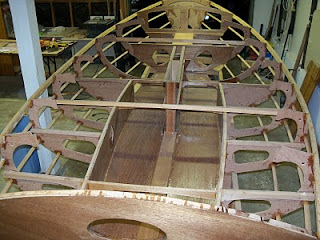