The yawl-rigged Navigator has a total of 7 spars. Two masts, two booms, a gaff, bowsprit and boomkin. I decided to make the two masts hollow using the birdsmouth technique. By enlarging the diameter of the mast by 10% and making the mast hollow, the mast ends up being the same strength as a solid mast, but as much as 40% lighter. It is not difficult to do but it requires a table saw and lots of epoxy. The technique is described in several articles at duckwork.com, for example here.

Ripping the strips, scarfing them to length, and cutting the birdsmouth notches was all straightforward. 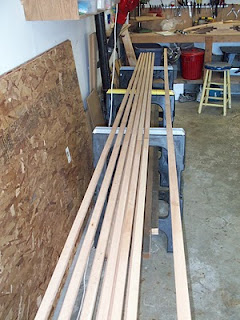 Featherboards are a must. The tricky bit was the taper. Both masts are larger in diameter at the base than at the top. The mainmast is a constant diameter for roughly the bottom half with the top half tapered. That means that each one of the staves has to be tapered. In other words, the area shown in yellow below has to be removed.

How do you cut a taper that's nearly 10 feet long by a fraction of an inch deep? Thoughts of sophisticated jigs came to mind, but were not appealing. Planing them by hand might work, but seemed difficult to do with any accuracy. Simply drawing a straight line of that length seemed difficult. I pondered this for quite some time then it finally hit me. If I had a long straight edge that I could clamp to the stave, I could trim off the yellow area with a router equipped with a flush trim bit. And what better straight edge than a nice new sheet of plywood?

So I clamped the stave to the edge of a sheet of plywood. At one end (the start of the taper, near the middle of the mast, lower right corner in the photo below) the stave was flush with the plywood straight edge. At the end (end of the taper, top of the mast, upper left in the photo below) the stave protruded above the plywood straight edge by the desired amount to remove. At the midpoint of the taper, it protruded half way up. I securely clamped it in place using many clamps. Like so: 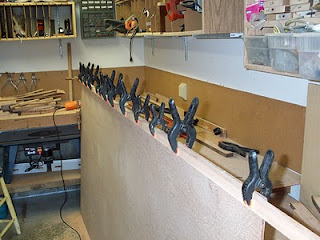 Then I proceeded to trim off the excess with the router. I had to remove and replace the clamps one by one as I went along, but it worked great, and it was quick and easy. And since I was using a sheet of plywood that I bought but hadn't used yet, it cost nothing.

After the staves were cut and tapered, the next step is to glue them up.  This step consumed a lot more epoxy than I thought it would, and required a lot more clamps than I thought. I thought I could just use wire ties, but they do not have sufficient clamping force. The best thing seemed to be hose clamps, but I only had a dozen or so of them. I ended up throwing every assorted clamp I could find at it. This photo was taken after I had removed all the clamps except the wire ties. 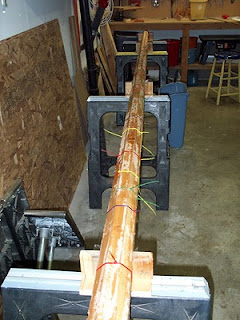 At the top, bottom, deck level, and anywhere that a fastener goes through the mast, the mast must have a solid core to prevent the mast from crushing. Prior to gluing up the mast, I inserted octagonal plugs at these locations. 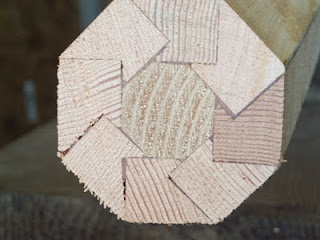 After the epoxy cures, the next step is to round the mast, which involves simply knocking off the corners with a hand plane. 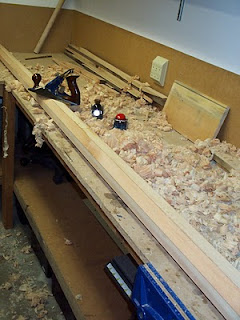 After getting the mast as close to round as possible with the hand plane, the next step is to sand it round. This can be done numerous ways: by hand, with a belt sander belt & drill, various sanding jigs and so on.
I tried several of those methods and found them all to be too time consuming and laborious.

Again, time to ponder. If only I could spin the mast, like on a lathe, then I could easily sand it. But how?
Enter: The redneck Shopsmith lathe!

Disclaimer: While this worked for me, it is dangerous. But not this dangerous. Just because I'm stupid enough to do this doesn't mean you should be.  If you attempt this you are risking serious injury. If your mast flies out and kills you, don't come crying to me, cause I warned you.

To attach the base of the mast to the Shopsmith, I did this: 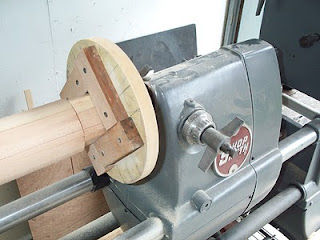 At the other end, I inserted a lag bolt into the top of the mast, which went through a hole in a piece of oak, which was securely clamped into a bench vise. 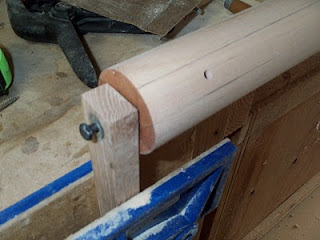 Then, making sure the speed was set to the slowest possible speed on the Shopsmith, I turned it on. As the RPM's increased, the mast started to wobble in the middle, but I found that if I loosely held it there with my hand, it would spin with little or no wobble. So with one hand holding the middle, and the other hand holding some sandpaper, I proceeded to sand the entire mast. The sandpaper would heat up quickly so I had to make frequent pauses, but I was able to sand the entire mast completely round in about 10 to 15 minutes. 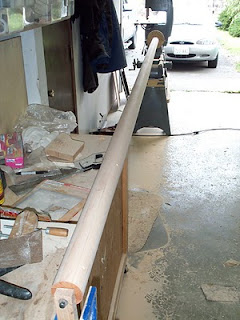