Next, I decided to tackle the centerboard. I found an excellent guide on building centerboards and rudders on the web here:

I tried my best to follow it closely. First I ripped strips of clear Alaskan yellow cedar. 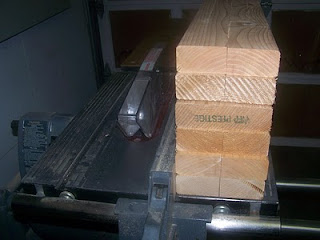 Laminated them making sure to alternate the grain direction to prevent warping. 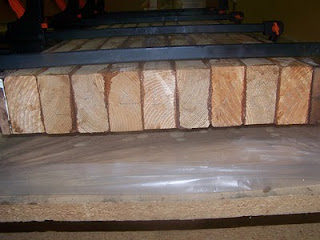 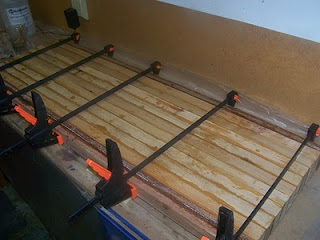 Because Alaskan yellow cedar is fairly soft, I used mahogany on the leading and trailing edges of the board for extra strength.

I don't have a thickness planer, but I use a device called a Wagner Safe-T-Planer that works very well. It fits into a drill press and it's kinda like a 2 3/4" wide router bit. Here is a youtube video showing how it works:

I mounted the planer in the Shopsmith and wheeled the Shopsmith over my workbench. I mounted the centerboard blank on wheels and rolled it around under the planer until it was flat. Then flipped it over to do the other side. After checking it with a micrometer I was amazed at how flat it turned out. 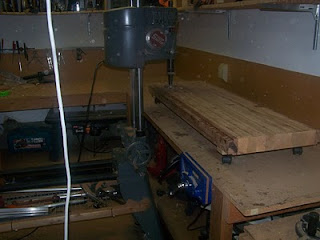 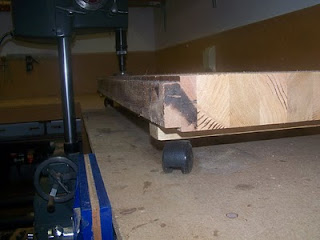 To do the airfoil portion, I made a paper template of the airfoil shape and glued it to the bottom end of the blank. 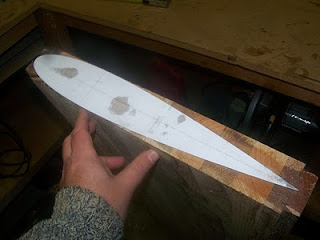 Then I mounted the blank back on the wheels, but this time I tilted the blank so that the cutter was cutting the material outside of the template. I had to hand-carve the blend between the airfoil and the top flat section. I used a forstner bit to hollow out a section to hold the lead, filled it with lead scraps, then topped it off with epoxy & wood flour mix.  Here is the completed centerboard. 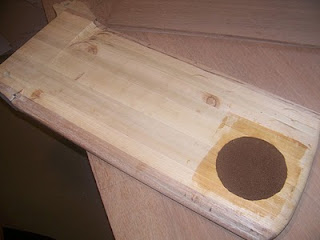